You are here: Home » News » No Cars On Washburn Park Hiking Trail

The Marion Conservation Commission recently walked the hiking trails at Washburn Park and found that the trail was twelve to fifteen feet wide in some sections and it appeared that vehicles had been riding on it.  Their discussion on Wednesday evening ended with a decision to request that the Board of Selectmen ask the Department of Public Works to place logs or stones on either end so vehicles cannot enter.  The trail starts at Washburn Park Road and runs to the skating pond.

In other business, the committee discussed and approved a request for Determination of Applicability submitted by Nelson W. Wicas to re-landscape the grounds at 15 Bass Point Road.  Work includes replacing a cedar hedge, transplanting holly and hydrangeas, adding topsoil to level the rear yard and re-seeding of the lawn.  The committee requested that Mr. Wicas not increase the average existing grade and that hay bales, used to control run off during the work, remain in place until the spring of 2014.

Next up the committee discussed a Request for Determination of Applicability submitted by Peter E. Bent to upgrade the septic system at 15 West Avenue, Planting Island.  Currently the property, which consists of two lots which are commonly owned, has an old stone cesspool and a leaching field.  The board agreed to the request with the condition that all excavation debris be taken off site.  The applicant will start excavation and determine if the old cesspool needs to be filled in with or removed.  A large tree located in the area will be taken down prior to excavation.

Gaissert requested an amendment to his plan in eliminating an earth berm requirement at 28 Front Street and replace it with the grass swale requested by Danhauser.  Both parties were in agreement that it was a good solution to eliminate a bowl of water where ducks would swim after heavy rain.

Chairman Larry Dorman noted that the land at 40 Lewis Street was owned by the Town of Marion for their pumping station house which sits on the corner of the property.  “I’m uncomfortable approving this without the approval of the Board of Selectmen,” said Dorman.  The committee agreed to contact the BOS and get written approval from them on the proposal.

Joseph and Susan Lasky came before the board with a Request for Determination of Applicability to replace an existing 10’ x 12’ deck with an enclosed 14’ x 18’ porch.  The project is located at 33 Giffords Corner Road.  The existing deck sits on three posts and an additional two posts will be poured.  The committee was concerned about roof runoff due to the property’s proximity to wetlands.  The Lasky’s agreed to put gutters on the new porch so run off will be to the lawn on the other side of the wetland area.

Last up was a brief presentation of final plans presented by Bay Watch Realty Trust to construct a 96 unit affordable housing complex under Chapter 40B with associated parking areas, on site and off site utility connections, storm water management infrastructure and related mitigation measures.  The project is located off Front Street (Route 105) and is adjacent to The Wave restaurant.  The discussion centered on the newly purchased piece of land which eliminates the need for a wooden bridge over wetlands.  The board took the request under advisement. 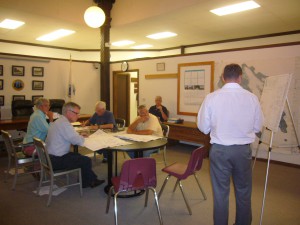