Abutters to the Rochester Town Hall had no objection to a new sign that is to be constructed in front of the building in an area that is currently a garden.

The Zoning Board unanimously approved a variance to the town of Rochester for the sign, which is not to exceed 14 feet in length.

“It sounds like a reasonable request,” Board Member Kirby Gilmore said. “It’s not going to interfere with public safety.”

In other news, the Smith family, of 21 Stewart Rd., was granted a special permit for the construction of an addition onto their current home.

They have been the owners of the property since 1996, and the appeal was for a special permit for the construction of an addition that would allow the Smiths to use their home as a multifamily home where their parents could live with them.

John Scanlon of Scanlon Construction LLC in Middleboro represented the Smiths at the appeal. Scanlon said that the addition would be in the back of the home and not visible from the street.

“It’s nice for the kids to know their parents are right next door and that they’re safe,” said Scanlon. Neighbors vouched for the Smiths, citing a solid relationship with them.

Finally, the board approved motion to grant a special permit to Laurie and George Buler for the operation of a horseback-riding academy at 152 Marion Rd. in Rochester. They also approved a permit for construction to a preexisting structure that houses 12 horses; the Buler’s want to add three more horse stalls to it.

The board granted the approval for the business under the conditions that the number of employees be limited to no more than 5, that the hours of operation be set between 8am and 7pm, that they limit the number of horses to 12, that all parking be off-road, and that any signage shall be in accordance with town bylaws.

Some neighbors voiced concern at the meeting, as well as through a letter to the Board, that large amounts of dust generated from their business could affect the neighborhood. George said that he would take the proper precautions to ensure that the dust would not bother the neighbors.

Laurie said that there is a total of 12 horses there now on two acres of land, some of which were rescued from “kill pens,” and some that are retired horses. She said that 13 total horses are the most they can house at one time. Said also said she has a Stable License.

“It’s my opinion at this time that this academy is compatible with this district,” Gilmore said. 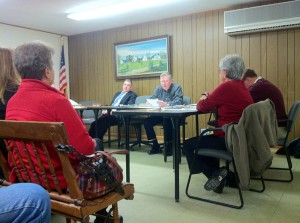