Nearly a dozen concerned residents turned out to Mattapoisett Town Hall to voice their concerns for a housing construction project on Grandview Avenue.  The public hearing was held during the Conservation Commission’s regular meeting on Monday, August 27.

Mattapoisett resident Dean Withrow filed a notice of intent for a request to build a single family home, driveway and well at 25 Grandview Ave.  Withrow was represented by David Davignon of Schneider & Associates, who was at the meeting to update the residents and Commission about the progress of the planning.

“It looked like a war zone,” said Conservation Commissioner Ken Dawicki of the state of the property in 2007.

Neighboring residents are concerned with flooding problems during rainstorms because the drainage system was never complete on the property, therefore when rain falls, it drains in the neighboring property of the Henderson family, creating a dam effect.

“We certainly don’t want to approve a plan that’s going to create a problem for the neighbors,” said Conservation Commissioner Bob Rogers.

Davignon will continue to work on the plan. The hearing was continued until the Commission’s next meeting on Monday, September 10.

The Commission also continued a hearing at the address of 52 Pico Beach Rd. which requested permission to install two 100-gallon propane tanks on the house’s property.  The notice of intent was filed by Diane D’Orlando, who was also represented by Davignon.

Davignon proposed the two tanks would be installed in order to provide heat for the residence, and would be anchored onto a 3’ x 6’ concrete pad, secured with a helical anchor and surrounded by a 9-foot fence.  The tanks would be situated in the driveway.

“We just want them to stay in the foot print,” said Peter McGowan.

The Commission voted to continue the hearing until September 10 so Davignon could draft plans for an alternative location for the tanks.

The Commission voted to continue the hearing for the Notice of Intent filed b Daniel and Laurie DaRosa who requested to install coconut fiber envelopes of sand along a Coastal Bank and plant grasses and shrubs in order to protect them from erosion.  The DaRosa’s were also represented by Davignon.

Davignon said that the proposed bank as it stands now is unstable and that the sand would help stabilize it. The address of the property is 1 Goodspeed Island.

The address of the property is 1 Goodspeed Island. The Commissioners were concerned with the maintenance of the sand and asked Davignon to provide a more detailed maintainence plan at the Commission’s meeting on Monday, September 10 at 6:30 pm in Town Hall. 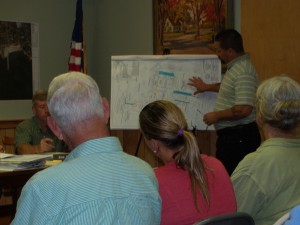