You are here: Home » News » Neighbors Oppose Expansion of “Camp”

The April agenda for the Mattapoisett Zoning Board of Appeals listed six hearings. Sitting board members were: Mary Ann Brogan, Norman Lyonnais, Susan Akin, Colby Rottler, and Kenneth Pacheco. With the assistance of Andy Bobola, director of inspectional services, they dispatched all but one with an approval.

The hearing garnering the most time and debate was for the property located at 4 Woodland Avenue owned by the Flaherty family. Mary Flaherty sought approval to demolish an existing structure defined as a one room “camp” building, and a shed in order to construct a small two-story year-round home.

The issues at hand were whether or not the lot was buildable, if there was a conflict due to the manner in which the lot was created, and concerns over storm water run-off.

When Sue Flaherty had gone before the Conservation Commission, it came to light that a Form A3 from 1975 had subdivided the parcel, which required research before the applicant could request a ZBA hearing. Having done that, her application was heard.

One vocal abutter, Carol Helliwell of 6 Woodland Avenue, opposed the project based on her concern that the Flaherty home would crowd her home and would have an adverse impact on her property. She also discussed concern over storm water run-off. Helliwell’s home was part of the original parcel before subdivision. From Helliwell’s standpoint, the Flaherty “camp” was never to become anything more than that.

Neighbor David Ross said that it has been decades since the family has used the camp, that it had no running water or plumbing, and the development of the lot should not be allowed. Ross noted that, when the Form A subdivision was approved, there was a three-year limit for the Flahertys to develop the lot. He felt that, since that had not been the case, then shouldn’t current zoning by-laws be applied?

Andy Bobola advised the board that it was within its scope to approve the application and allow the home to be built because the Form A created that condition. He said, despite the three-year limitation, there was no evidence that the property had not been used over the years. Also, as long as the abutters’ concerns over storm water run-off were addressed, he said the ZBA could approve the application.

Before closing the hearing for deliberation, Mary Flaherty made an impassioned statement to the board citing her family’s many decades as property owners in Mattapoisett, and her desire to carry out the plans her father had hoped to complete for the family. She said it had always been their plan to build a small home on the family’s lot.

In the end, the board moved to allow the construction of the home, putting in place mandated storm water management measures to alleviate any potential draining onto other properties. Their rationale was that crowding in the area was not significant, given that the area is already densely settled, and the board took abutters’ concerns regarding storm water run-off into consideration.

Other hearings that received the board’s positive votes were:

Richard and Laure Warren, 7 Pico Beach Road, to construction a new home in conformance with FEMA and state requirements for flood zones; James and Annamaria Barron, 36 Water Street, for the construction of a balcony on the second story of the existing home; Rollin Buckminster, 79 Marion Road for a change of use from general business to marine for a boat motor and machine repair enterprise; Eric Smith, 8 Park Place for the construction of an in-ground pool.

The application for John Marvin, 14 Mechanic Street for the construction of an addition to an existing home, brought up questions about the size the addition would be, and if it would fit into the neighborhood. Representing the applicant, Robert Field of Field Engineering said the finished project would increase the lot coverage from 15% to 36%. Brogan felt that a study of the area was in order to see if any other lots in the neighborhood had similar coverage. The hearing was continued until May to give Field time to complete the study and report back to the board. 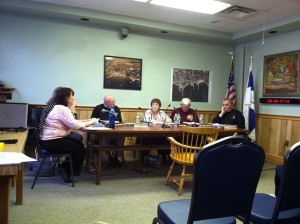