Improving the hydraulic controls at Grassi Bog since the system failed and flooded during the spring of this year has been a slow process and was further halted on November 18 by the Marion Conservation Commission as a result of its own engineer’s written comments on some perceived inconsistencies in the improvement plan. And when the ConCom refused to take a look at the plan to compare it with the engineer’s report, Marion Open Space Acquisition Committee Chairman and wetlands specialist John Rockwell let his frustration show.

The plan essentially calls for an increase in the size of the rock spillways (bigger boulders), and a larger arched culvert. However, the report from Matthew Pitta and Michael Guidice of CDM Smith cited three of what they considered deficiencies, which Rockwell addressed and explained for the commission. He said he was “mystified” by the three comments.

First, the engineers observed that the first two interior spillways appeared to be reversed, “with the downstream spillway having a higher crest elevation than the upstream spillway.”

False, according to Rockwell. “I believe that’s incorrect,” Rockwell stated. “I just looked at the plans and that’s not the case…. The first observation is incorrect.”

Although the items are relatively minor, noted Chairman Norm Hills, he wanted the engineer who drafted the plans to come to an understanding with CDM Smith before moving forward.

“But the fact that this plan, the new plan, doesn’t have the elevation, I mean, this was going to be the new plan of record,” said Hills. “You shouldn’t have to go back to the old plan.”

Rockwell warned the commission that the damaged spillway would likely fail again during the winter if action is not taken, and asked if the commission would look at the plan to address CDM Smith’s comments, avoiding further delay of the project.

“Well, that’s the purpose of the public hearing,” said Rockwell.

ConCom member Joel Hartley asked Rockwell if he was an engineer, qualified to assess the project plan.

“I can read a plan, can’t you?” Rockwell replied.

“It’s dueling engineers is what we’ve got here,” said Hills. “We want them to at least talk to each other.”

“Well, can I at least get you to look at the plan?” Rockwell asked again.

“I don’t want to do that right now,” said Hills.

“Well, you read plans all the time,” Rockwell said.

The two went back and forth and soon the other commission members were vocally supporting the chairman.

Hills proposed continuing the hearing until December 9, and the commission voted in favor.

“I just don’t understand why you won’t just look at the plan,” said Rockwell, “and you’re refusing to do it and I’m sorry for that.”

Also during the meeting, despite having met the requirements of his Notice of Intent, the commission initially refrained from taking action on the Shea Doonan aquaculture farm off Ram Island until selectmen approved the project. Now with selectmen approval, the commission issued the Order of Conditions for Doonan in a 4-1 vote. Commission member Cynthia Trinidad voted ‘nay,’ just as she promised a fortnight ago.

Even with ConCom approval, Doonan still needs approval from the U.S. Army Corps of Engineers and various state entities such as the Division of Marine Fisheries and the Natural Heritage & Endangered Species Program before the matter bounces back to selectmen for the final say.

The commission’s list of special conditions stipulated that the OOC would be void should one or more of the aforementioned authorities deny the project; the project, however, would already die should it be rejected because of eelgrass or a number of other reasons, regardless of ConCom approval.

“I’m not convinced that putting a condition on it will help,” said Trinidad earlier in the discussion over conditions.

‘Help?’ What do you mean, help? asked Doonan. “What kind [of help] are you looking for?”

Trinidad repeated the sentiment she spoke at the last meeting, saying she finds Doonan “lackadaisical” in his approach to the project, especially in communication with Ram Island residents. She then pressed Doonan to specify where he would buy his seed oysters, repeatedly asking the question when Doonan said he had not yet officially chosen a source.

How do I know you’re not going to fly the oysters in from Japan and poison the harbor, asked Trinidad.

“That’s unfair. This is my harbor too; I’m not going to poison it…. I’m just going to leave it there,” said Doonan perplexedly. He did add, though, that the family business is shellfishing and he had been immersed in the activity since he was ten. He said, of course he would be getting them from a Massachusetts certified hatchery.

Okay, said Trinidad turning up the volume of her voice, but where are you going to get the oysters? “Give me a name…’Pile of Seafood,’ I don’t know… I don’t care…”

Chairman Norm Hills entertained a motion to close the hearing, and Doonan left the meeting.

In other matters, the commission issued a Negative 2 determination (Notice of Intent not required) to Harold Wildman of 7 Blackhall Court to rebuild an existing deck and previously existing staircase after-the-fact.

The next meeting of the Marion Conservation Commission is scheduled for December 9 at 7:00 pm at the Marion Town House. 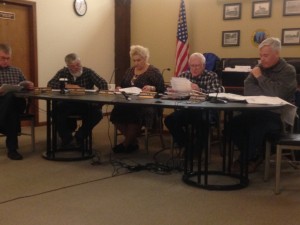