On Wednesday, August 22, 2012, the Marion Conservation Commission met for their regular meeting.  The first hearing of the agenda was in regards to a Notice of Intent filed by George and Lois Graboys of 95 Holly Road.  They would like to construct an elevated boardwalk on their property, with a platform for storing kayaks and canoes.

Dave Davignon of Schneider and Associates represented the Graboys.

“We had a meeting about a month ago and there were several changes made to the plans since then,” Davignon said.

The plan has been updated to include the new FEMA flood maps, adopted by the town earlier in the year.  Timbered decking for the walkway has also been changed to a grading material.  The new material will allow for more sunlight penetration than the wood that was proposed before.

The Conservation Commission voted in favor of the project.

Next, the Commission heard from Kenneth Mousette, trustee of Investors Fund Trust, regarding a Notice of Intent to construct a concrete roadway, cul-de-sac, and storm water management system for two single-family homes on River Road.

“There are no wetlands on the site.  Natural Heritage has approved, saying there will be no negative impact to the site,” Moussette said.  They also removed proposed retaining walls and retooled the drainage system to flow into a nearby wetland.

“I think this makes for a much better design.  We’re able to keep natural vegetation and it fully complies with the storm water management policy.  By removing the retaining walls, it makes it more aesthetically pleasing,” he said.

Commission Clerk Norman Hills said that they would have to move the drainage pipe back from the wetland area, because it is not permitted to drain directly into it.  Moussette said it would not be a problem to relocate the end of the pipe.

The Conservation Commission voted to approve the project.

The Commission then heard from Peter and Asha Wallace for their Notice of Intent to maintain two existing view corridors from the eastern edge of their lawn toward the edge of an area salt marsh.

Dave Davignon was also representing the Wallace’s at the hearing.  He said they are looking to remove briars and invasive species from the property and have proposed some trees be removed for safety reasons.  The plants removed would be replaced with native vegetation.

The Commission requested that the trees proposed for removal get reflagged.  As a result, the hearing was granted a continuation until the next meeting.

Then, they held a hearing for a Request for Determination of Applicability filed by Steven Hurley of 21 Bayview Road, who would like to landscape the site with gardens and add a granite stepping stone pathway.

“What I’d like to do is bring in new soil to reestablish the line so I can plant some dwarf evergreens and native grasses and other perennials,” he said.  None of the proposed plant material would be invasive.

Given the scope of the project and the amount of fill proposed, members of the Conservation Commission felt that Hurley should have applied for a Notice of Intent, not an RDA.

“I’m not comfortable doing it as a request, I feel like we need an NOI on this one,” said Chairman Sherman Briggs.

“You’re going to have to develop engineered plans and send letters to all the abutters so they know what’s happening,” said Clerk Norman Hills.

“But from a landscaping point of view, everything he’s proposing is perfect and will work well for that area,” said Commission member Stephen Gonsalves.

The Conservation Commission voted to deny the RDA.

The last hearing of the night was for Sanford Russell, Jr. of 5 Main Street, regarding his Notice of Intent to replace a carport with a garage, to remove a retaining wall, the reconstruct the driveway apron, and install a trench drain.  This hearing was continued from the July 25 and August 8 meetings, both of which saw a considerable amount of discussion put forth by the abutters to the project.

Neighbors were concerned about the scope of the project, suggesting that the height of the garage was too great and would impede the water view from yards and public walkways.  A few people also worried about the risk of negatively impacting drainage for the neighborhood.

“There have been a number of changes made to the plans since the last meeting.  There has been a good deal of abutter interest on this,” said Dave Davignon, who was representing Russell.

“What we’ve done is move the building [garage] substantially to the east, approximately a ten foot move,” he said, adding that there would be no excavation needed on abutter property during the construction of the foundation.  They will be changing the shape of the driveway so that excess rain run-off can flow down to the rear of the property.

“The garage has been redesigned. There will no longer be a door on the front and the back,” he said.  In addition, a proposed access ramp will not be required due to the new location of the garage.  “We have updated the plan to reflect the new FEMA maps.”

“All three major aspects of this plan have been altered, from the size of the building, to the shape, to the location,” said Hugh Dyer of 6 Main Street.  “In my mind, that’s a brand-spanking new building,” he said.

In addition, he felt that the abutters should have been notified about all the changes, as well as notified as to when the plan would be proposed at public meetings.

Dyer was also worried that the Zoning Board of Appeals and Conservation Commission were looking at different plans at the times of their respective meetings, due to all the changes made to the original plan.  He was also skeptical that the proposed drainage changes would be effective as they were presented.

“I think we need independent confirmation that the new plans would work,” he said.

“We’re not increasing run-off from outside surface areas and the run-off from the roof will go into a dry well,” Davignon said. He agreed that there were significant changes made to the plans, but they were in direct response to discussions during meetings of the ZBA and Conservation Commission.

“We are not required to notify abutters of proposed changes,” he said.

He said that the plan the Conservation Commission had on their record was the same that was submitted for the most recent ZBA meeting.

“There is no difference between this plan and what was submitted to them,” he said.

“I believe the drainage issue is still there,” said William Rogerson of 9 Main Street.                 “Whereas all of the new concrete is in the front, the old concrete was in the front and the back,” he said.

Rogerson said that by having the run-off directed to the west, it will run down into the harbor during a heavy rain.  Previously, it was proposed that the water would flow in two different paths.

“I think that’s inappropriate,” he said.  “To the extent that sediment goes into the harbor, it gets stuck there.  As far as I know, they won’t permit them to dredge.”

At Davignon’s request, the Conservation Commission approved to continue the hearing until the next meeting.

•The Commission voted to issue a three-year extension permit to Marion Lands Trust, LLC. To replace 1,900 square feet of pavement with lawn and plantings on property at 369 Wareham Street.

•The Commission issued a Certificate of Compliance to the Town of Marion for installing a drain pipe with culverts on Giffords Corner Road.

•They issued a full Certificate of Compliance to Solo Realty, LLC., for upgrading the septic system at 102 Quails Crossing Road.

•The Commission issued a partial Certificate of Compliance to Gale P. Runnells, for constructing additions to a dwelling at 17 Reservation Way.

The next meeting of the Marion Conservation Commission will be on Wednesday, September 12, 2012 at 7:00 pm at the Town Hall. 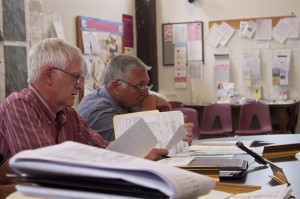