It only takes firefighters minutes to respond to an emergency, but how long does it take for the department to buy a new truck? Five years.

The Mattapoisett Fire Department welcomed the newest member of its fleet, a dazzling red engine, on the afternoon of Tuesday, March 27 to its station on County Road. Dozens of people gathered to commemorate the new addition.

“It’s an all around great asset to the town,” said Fire Chief Andrew Murray.

The new engine, deemed Engine 1, will replace the old truck, which has been with the department since 1987.  At 25 years old, it was the oldest truck in the building. According to Murray, it took nearly 20 percent of the truck’s life to replace it.

The plans for a new truck must pass through a variety of committees before it is sold to a builder, Murray said. A Truck Design Committee, formed by the department, must present to the finance committee, capital committee, board of selectmen and at the Town Meeting. From there, the truck is placed on the ballot so residents can vote. If approved, the plans are sold to a builder who brings the plans to fruition.

Despite the long process, Murray assures it’s well worth the time and effort.

“We have an extremely dedicated group of members here and now we have the equipment to do our jobs better and safely respond,” said Murray. “The new truck helps cut our response times down, it’s less accident prone, it handles itself better and brakes better.”

The next truck in line for an upgrade is Engine 4. It came to the station in 1996 and is 16 years old. Murray says the department will try to prolong the life of this truck as long as possible. 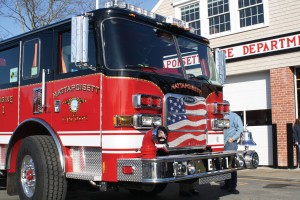