Due to the recent retirement of Jeff Chase as Chairman and regular member of the Mattapoisett Zoning Board of Appeals, the board needed to fill several openings. Their goal during the June 19 meeting was solely for this purpose. They needed to select an alternate member to move up to a regular member position, choose a chairman, and select a clerk.

With the full board in attendance, they did just that.

The alternates to this board are: Stephen Vaitses (July 2002 – April 2010, term has expired and is scheduled to be renewed); Kenneth Pacheco (Feb 2006 – April 2019); Eugene DesLanders (June 2009 – April 2015); Colby Rottler (July 2009 – April 2015); and Tony Tranfaglia (April 2003 – April 2016). This group was asked by Akin to share their level of interest in moving up to a regular slot on the board. Declining the opportunity were Vaitses, citing other commitments, and DesLanders due to seasonal migration to warmer climates. Expressing an interest in moving up were Pacheco, Rottler and Tranfaglia. In the end, this group selected the member for the regular slot based on seniority – Kenneth Pacheco.

The next meeting of the Mattapoisett ZBA is scheduled for July. 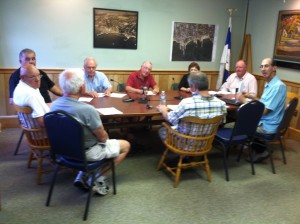