The Mattapoisett Board of Selectmen made resolutions to their initial criteria for their search for a Launch Service in Mattapoisett Harbor. The selectmen deliberated with the Marine Advisory Board at its meeting on Tuesday, March 27.

The Board of Selectmen and Marine Advisory Board met last week with the two candidates vying to start a launch service in Mattapoisett Harbor. While neither candidate have been hired yet, the selectmen assure that good progress has been made in determining what would be best for the town after sitting through the two interviews.

“It’s been a good learning curve for us,” said Selectman Tyler Macallister.

The two boards resolved a variety of different points which were all up in the air during the interviews. First, the two parties agreed that Barstow’s Wharf should be the permanent location of the launch service, and that in its first year, the service would be made available from June 15 through Labor Day from 8:00 am until a half-hour past sunset during the week. From Friday-Sunday, the service would be available until 10:00 pm.

The town would provide a place where the launch could be stored in the off-season for the duration of the contract.

In terms of money, the board agreed that money is not the biggest issue on the table, and it is more a matter of using the minimal amount of dinghies in the harbor as much as possible. An agreement would be reached between the Marine Advisory Board and the selected candidate prior to signing the contract. Both parties also agreed for an opt-out clause on both sides of the contract after the three-year term is up.

The board will re-draft the requirements for the launch service and hope to present them on or around April 15.

In other news, Bill Tilden gave an update for the Annual Fourth of July Road Race. Tilden said he hopes to draw nearly 1,000 runners this year; a figure that is comparable to last year’s turnout. Tilden also said planning is going along very smoothly and little will change.

The only major change will be seen on the race course. Due to construction on North Street that is scheduled for the summer due for the installation of a new drainage system, Tilden is looking to re-route the course and wishes to utilize various side streets in the area instead of North Street. The detoured area is only a matter of a couple hundred yards, he said.

John Cornish gave an update for the Community Sailing Program that will start its sixth season this summer. Cornish presented the board with a packet of information, including a budget report that shows that the program is in a profit loss state. Cornish said several factors contribute to this state including the maintenance of the 25-30 boats, implementation of new life jackets for the 100+ campers each summer and the purchasing of new boat engines.

The Board expressed the desire to get a formal written lease agreement from the Sailing Program and the town, as the program is using a town-owned building for its non-profit purposes.

Town Administrator Michael Gagne said the budget committee is still meeting weekly on Thursdays to firm up the budget for the 2013 fiscal year.

The board approved the appointing of three new members to the council on aging: Marcella Nelson, Alicia Sullivan and Robert Belenger.

It was also announced that the Mattapoisett Annual Town Meeting will be held on Monday, May 14 at 6:30 pm in the Old Rochester Regional High School Auditorium.

The Mattapoisett Board of Selectmen will meet next on Tuesday, April 10 at 7:00 pm. 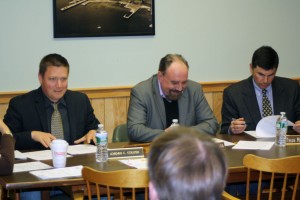