Interest in the topic of increases in water and sewer rates was expected to bring out the public to the Marion Board of Selectmen meeting on August 25. Only nine residents showed up. But in spite of the surprisingly low turn out, the subject matter was fully vetted.

“I hate being the bearer of bad news,” said Mooney. “If this rate doesn’t go through, the state will not approve the enterprise funds…. If this doesn’t go, an even larger increase is in the future.”

Mooney said, in real terms, a household of four would see an increase of $4.19 per year in water bills and $22.70 in sewer expenses. She further cautioned all in attendance that, although the evening was dedicated to looking at just fiscal year 2016 budget needs, FYs 17, 18, and 19 would see even higher rate increases.

“If we don’t have a rate increase in FY16, it impacts things we’ve already put in place,” Mooney said.

Chairman Stephen Cushing asked, “What if we put off a rate increase, we’d be in line for a bigger increase?” Mooney replied, “We’d have to make up four quarter billings in a three quarter cycle.”

A driving point in sewer rate increases is the NPDES permit looming in the imminent future, and the town is anticipating this to equate to higher costs in processing sewage. The town’s current permit requirements are being handled, said Selectman Jonathan Henry, but new, stricter EPA requirements will affect costs – how much is presently not known.

Resident Jay Ryder then came forward to share information he had found from a Tighe & Bond study. Ryder said, “Annual water rates (in Massachusetts) are $112 to $1560. The average is $532, and Marion’s are the second highest. Sewer rates go from $221 to $1,874 with an average of $756. Marion’s are the third highest.” Asking Mooney he inquired, “Can’t we pay for these some other way?”

Mooney came back to the microphone with this response, “You’ve got Tabor Academy, why aren’t we getting a PILOT payment in lieu of taxes?” She continued, “There are 36 properties, at the current rate that comes to $836,000 we could be receiving … I’m throwing it out there … their children are going to Sippican School without paying taxes.”

Henry responded, “PILOT program is an old issue…. A new Board of Trustees at Tabor will deal with local issues which is new … it’s an open issue.”

Henry also pointed to the fact that most cities and towns don’t go it alone when it comes to water and sewer service, but those that do are facing the same issues that Marion is facing – higher costs to provide services.

In the end, Chairman Cushing called for a vote. The increases were unanimously approved.

The next scheduled meeting of the Marion Board of Selectmen is scheduled for September 8 at 7:00 pm at the Police Station conference room. 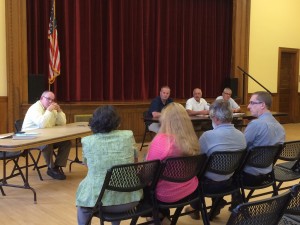