You are here: Home » News » Marion’s Master Plan – A Work in Process

On Saturday, October 24, about 50 people in Marion gathered in the Music Hall for another round of workshops to discuss a master plan for the town. Navigating through the multi-layered process was SRPEDD’s Grant King, principal comprehensive planner. As he has done in previous planning workshops, King noted that SRPEDD’s role is assisting cities and towns who are building master plans – a process that takes many months and many minds.

The majority of those who came out on this autumn weekend morning were already well entrenched in the needs of the town. Nearly everyone present was or had previously been a member of a town board or committee. Members of the Planning Board, Board of Health, School Committee, Marion Open Space Acquisition Committee, and Townhouse Building Committee were present. However, one resident said she was new in town.

SRPEDD’s presentation included an overview of previous workshops where data had been collected from contributing residents on a vast number of topics. Data such as demographics of the community, transportation needs, infrastructure, rising water levels, and preservation of the historic nature of the town was collected and displayed on charts and graphs in an effort to bring focus to the most pressing and important changes the town is facing.

“We’re here to present draft elements that will be finalized by the end of the year,” King said, explaining that the main goal of the public workshops was to collect data that could indicate what the town needs and then for SRPEDD to aid the town “in getting there.”

The data collected thus far held such common themes as improving transportation and safety, creating zoning bylaws appropriate for growth, and protecting the harbor and the village. Woven throughout each common theme was a desire on the part of the community to maintain its present characteristic – a small New England seaside town.

King reminded the attendees that the town’s aging population, decreasing school enrollment, and dependence on residential property taxes would remain significant drivers or deterrents to growth well into the future.

Those striking data points were: a population that has aged by a decade since 1990 with 30 percent of all households having a least one person 65 years of age or older, and a steep decline in school enrollment with 50 percent of the entire student body now in junior and senior high school.

Sewer issues were also on the minds of residents. The public sewer system that services sensitive coastal neighborhoods is plagued by fresh water infiltration, King told the group. Federal and state clean water regulations that had become far stricter since the construction of the sewer system would have to be addressed soon, King noted.

After his presentation, King asked the assembled to break up into two groups for further informal discussions on the future of Marion. Additional data was collected and a final SRPEDD planning meeting is scheduled for sometime in January.

For more information or to give input to the master plan process, you may contact the Marion Planning Board at 508-748-3517 or via email to tsantos@marionma.gov. To view SRPEDD data, you may go to www.srpedd.org/marion-master-plan or visit www.facebook.com/marionplan. 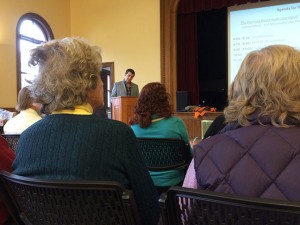