You are here: Home » News » Marion Snow Budget in the Red

This snowy and icy February has drained the Town’s snow and ice removal budget, prompting the Marion Board of Selectmen on February 20 to vote to allow deficit spending to cover the expenses from the last storm and any further storms to come.

The snow and ice removal budget was set at $50,000 and is now $19,475 in the red, which Town Administrator Paul Dawson told selectmen does not include the payroll from the February 14 snowstorm.

Selectman Jody Dickerson commented that, instead of the roughly $70,000 the Town has spent so far, he was surprised to hear the total was not yet more like $100,000 spent.

Dawson said snow and ice removal from Winter Storm Juno, which blasted the area with roughly 20 inches of snow and blizzard conditions on February 7, might be eligible for reimbursement from FEMA and MEMA due to the calling of a state of emergency during that storm.

“So we are marching forward with that assumption,” Dawson said. The February 14 storm did not reach the threshold for a state of emergency in the Tri-Town region, so the Town does not expect any reimbursement from that storm.

Also during the Friday special meeting of the selectmen, the board voted to award the contract for construction of the new Great Hill water tank to DN Tanks of Westfield, MA, the lower of the two bids the Town received for the project.

The next meeting of the Marion Board of Selectmen is scheduled for March 3 at 7:00 pm at the Marion Town House. 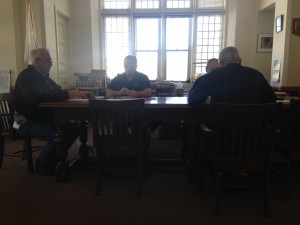