The Marion Energy Management Committee met on Monday, July 23 for their monthly meeting.  The main topic of discussion was a long-awaited report compiled by TNT Energy detailing the total estimated energy savings if many public buildings had updated resources, such as new insulation or updated boiler systems.

Since this was the first time most of the committee members had seen the report, their reactions were varied.

The Marion Town Hall, however, is not as promising.  The report, which was funded by local utility company NSTAR, lists new steam radiator controls, steam trap renovation, and boiler replacement as some of the recommended upgrades.  It would require the most extensive work of any of the buildings listed on the report, but the incentives are uncertain.

Currently, the town is looking at a cost of $148,000 to update everything in the Town Hall, with an estimated $2,910 in utility incentives due to updated motion sensor lights, leaving a net cost of $145,890.  It is unclear what the total utility incentives would be, as the report does not include estimates for most of those line items.

“Let’s see if we can prioritize them.  On something like the Town Hall, clearly we need more input before we can make a decision,” said Member Bill Saltonstall.

“At least we have numbers now that can be used,” said Vice Chairman Norman Hills.

The report estimates a total cost for all the projects at $466,130, with utility savings at $52,240, for a net cost of $411,090.  The Energy Management Committee will take this report into account when evaluating which buildings to update.  They may also seek to have an item on the next Town Warrant in order to get approval to undertake some of these renovations.

In other business, the Energy Management Committee discussed the slow process of drafting the large-scale solar photovoltaic by-law, as they have not yet found an appropriate by-law already in existence to use as a basis for a Marion law.

The next meeting of the Marion Energy Management Committee will be on Monday, August 27, 2012, at 7:00 pm at Marion Music Hall. 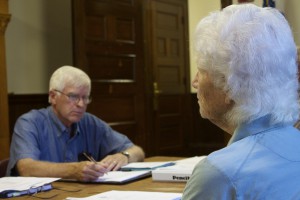