A Marion official, his wife, and a retired Carver official now face embezzlement allegations in a civil suit filed by the Carver, Marion, Wareham Regional Refuse Disposal District on June 22.

Former Executive Director of the CMWRRDD Ray Pickles, his wife Diane Bondi-Pickles, and retired Carver Health Agent Robert C. Tinkham Jr. are accused of embezzling $838,457 of public money over a five-year period in a lawsuit that charges Pickles et al. with nine different counts, including Fraud, Conversion and Civil Theft, and Civil Conspiracy.

Those withdrawals, the complaint states, had no supporting purchase orders, bills, receipts, or other documentation to prove their legitimacy.

Pickles also allegedly reimbursed himself $13,793 in fuel costs for fuel he used for his personal boat.

The complaint states that the civil action stems from the misappropriation of public funds from the CMWRRDD “by its former consultant and his wife, [Tinkham], and fictitious corporations they created to defraud the citizens of Carver, Marion, and Wareham, by embezzling public funds for their own personal use.”

Under Moss Hollow Management Corporation, listed under Bondi-Pickles, Pickles paid himself an additional $281,909 between July 1, 2012 and January 2018, in addition to his salary.

Moss Hollow, also named as a defendant, was involuntarily dissolved by the Secretary of State’s Corporations Division on June 30, 2017 for an unstated reason, but Pickles continued to make payments to himself via the defunct corporation, says the complaint.

Tinkham, who was assigned to perform inspections of the Carver landfill that was under Pickles’ management, is accused of conspiring with Pickles “to personally convert more than $262,000.00 of the District’s funds for his own personal use from 2010-2018.”

The complaint was signed by Marion Town Administrator Paul Dawson and filed by the CMWRRDD’s attorneys.

The same day as the filing, a Justice of the Superior Court approved two motions for ex parte orders against the six defendants.

An ex parte order essentially froze the real and personal property interests of the defendants, with a total amount of $838,457 attached to each defendant before being served the complaint, and another ex parte order for trustee process put a hold on the Eastern Bank and Mutual Bank accounts of the defendants, and holds any pension payments from the Plymouth County Retirement Board.

“There is a clear danger that the defendants, if notified in advance of the District’s request, … will withdraw the funds or credits from the hands or possession of the trustee and remove from the Commonwealth or will conceal them,” wrote the Justice in the order.

Furthermore, the Justice wrote that the Court found “a reasonable likelihood that the [CMWRRDD] will recover judgment.”

A June 28 preliminary injunction hearing was not held as scheduled “at the defendant’s request,” documents state, and will be rescheduled.

Pickles et al. could be ordered to reimburse the district the full amount in damages and even three times the actual damages, in addition to interest, costs, and attorneys’ fees.

Also, as it states in the court documents, the investigation is ongoing and further misappropriations could ultimately be discovered.

The CMWRRDD is poised to begin an extensive forensic audit of the last six years during Pickles’ tenure. The last time Pickles filed an annual audit of the district was in 2012.

On June 29, Dawson confirmed during a phone conversation that an unspecified government agency was at the Town House earlier this week requesting documents for an investigation, suggesting imminent criminal charges.

*The printed version of this article that will appear in the July 8 edition of The Wanderer will include additional in-depth information. 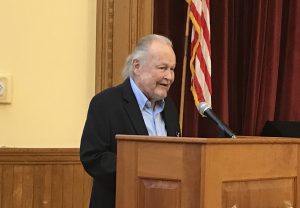