Marion Fire Chief Thomas Joyce announced his intent to retire in a letter addressed to the Marion Board of Selectmen, and on January 20 selectmen had nothing but good things to say about Chief Joyce who will retire June 30 of this year. Now selectmen must decide where they will look for his replacement – in-house or seek elsewhere.

“We knew that this letter was coming,” said Town Administrator Paul Dawson. “His letter was a very beautiful letter, thanking a number of people and organizations…”

Dawson said it could take some time to appoint a new fire chief, and he recommended the board provide him with guidance as to which direction he should proceed regarding advertising for the position.

Dawson said, in his opinion, the board could find a suitable candidate in-house.

“If we could find a new chief that was as good as he was, we’d be in good shape,” said Board of Selectmen Chairman Jonathan Henry. “I’m very proud of him. He did have a lot on his plate and he handled it without making a public spectacle out of it.” Henry continued, “I personally think you’ve got to go out there and see what’s out there in the fire world.” Henry said it would not be doing the public any service unless they did.

“It is a long process. It does take about six months if you do it properly,” said Dickerson. “I think we should throw a large net out there and see what we bring in.”

The board will discuss the matter further at its next meeting.

Also during the meeting, the board gave Dawson authorization to expend a maximum of $5,000 on preliminary legal services from an environmental law office based in Washington D.C. to assist the Town with its NPDES (National Pollutant Discharge Elimination System) dilemma with the Environmental Protection Agency.

The EPA rejected the Town’s request to extend the comment period for 180 days, but did allow for a 30-day extension until February 2 due to the holiday season interrupting the Town’s initial 30-day comment period.

The law firm of Hall and Associates will assist the Town during the initial comment period to build a case against the science that the EPA used to determine the new lowered nitrogen limits for the NPDES permit, as well as the pending requirement to eliminate the lagoons.

In other matters, the Buzzards Bay Area Habitat for Humanity house to be located at 185 Wareham Street can finally break ground now that selectmen have passed the final hurdle – a vote to execute the deed and the accompanying easement on the property.

“Talk about Murphy’s Law,” said Dawson. “If there was anything that could go wrong here, it did.” He said the Town and the organization “soldiered on” anyhow, and both parties were now at the finish line.

Henry commented that even the Louisiana Purchase took less time to complete than this project.

The Friends of the Marion Council on Aging gave a brief update on data they collected to assist the Town in studying the feasibility of a senior center for Marion.

As of 2010, 30-percent of the population in Marion is over 65, and Priscilla Ditchfield told selectmen that by 2023, it will reach 40-percent. She said senior citizens reside in about half the households in Marion, with one-fourth of the remaining seniors living alone. The lack of a central “hub,” said Ditchfield, is a concern among seniors.

Representatives from SRPEDD approached the board for feedback regarding a regional transportation plan. Selectmen cited County Road as a major concern, as well as the intersection of Routes 6 and 105.

The next meeting of the Marion Board of Selectmen has not yet been scheduled, but the board will hold a special meeting before the NPDES permit deadline date of February 2. 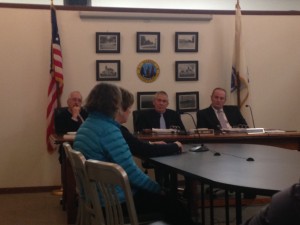