You are here: Home » News » Energy Management Comm. to meet with Selectmen

The Marion Energy Management Committee met on Monday, August 27, 2012, for their regular meeting at Music Hall.  At their last meeting, the Committee members received the first results from the energy audit they helped organize, the object of which was to determine how the town of Marion can make its public buildings more energy efficient.

Chairman David Pierce said that the energy audit recommendations were sent to the Board of Selectmen and will be meeting with them on September 4, 2012.

“[Town Administrator] Paul [Dawson] said the numbers looked good and felt that we should move forward,” Pierce said.  “I think what we’re trying to solicit from the Selectmen is an idea of the palatability of this coming before the town at the fall Town Meeting, and what sort of aggressive steps we should take,” he said.

Based on the summary, the Committee recommends three priorities for modifications of town buildings, which they sent in a letter to the Board of Selectmen.

•Priority #1: Upgrade the lighting and sensors in all facilities except the Town Hall.  The total cost would be $169,000, after applying utility incentives.  About $113,000 would go to updating the Sippican School.  The town would save $65,000 per year in electricity costs.

•Priority #2: Replace insulation and boiler controls in the Fire Department at a cost of $7,000.  The payback period, figured over seven years, would yield a savings of $1,000 a year.

In the letter, the Committee recommends excluding the Town Hall from action due to the overall uncertainty of the future of the building.  If all suggested recommendations were implemented, it would cost about $148,000 to upgrade the Town Hall.

The Committee also discussed the progression of the proposed large-scale solar photovoltaic by-law.  Members of the EMC recently met with the Planning Board to review the language of the by-law, but the Board felt that some zoning details of the law were inappropriate.

“I have suggested minor changes to things like the control of the lighting, and also if there is quite a large area of land involved, the set-backs be ratioed [sic] according to the size of the lot,” said Committee member Steve Kokkins.  “I would suggest, first of all, the Planning Board, will have some recommendation for their own changes.”

Chairman David Pierce said that he would prefer the EMC to have a workable draft written in conjunction with the Planning Board for a fall Town Warrant article by October.

In other business, the fall Town Meeting is scheduled for Monday, November 26, 2012, at 7:00 pm at Sippican School.  As a result the Energy Management Committee may reschedule their monthly meeting for November 12.

The next meeting will be a meeting of the Southcoast Alternative Energy Collaborative, on Monday, September 24, 2012, at 7:00 pm at Music Hall. 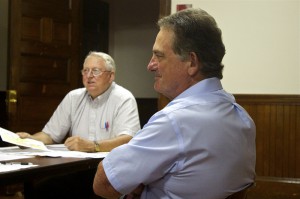