In the first public hearing, James Turschmann from CLE Engineering spoke on behalf of Sam and Theresa Barrington of 22 Point Road, who would like to install concrete access panels from the shoreline to mean low water to ease swimmers’ access over the intertidal cobble.

Commission Clerk Norman Hills brought up the issue of how they intend to get heavy equipment to the site, as access from Point Road is inadequate.

“They are going to have to make sure they don’t disturb any of the vegetation,” said member Joel Hartley, sighting the appearance of plant life close to the site in the aerial photos supplied with the plan.

The Commission voted in favor of the plan, to which they added an order of conditions concerning the length of the walkway and the disturbance of native vegetation.

The Conservation Commission also heard from Dave Davignon of Schneider and Associates on behalf of George and Lois Graboys of 95 Holly Road, who would like to install a boardwalk on their property with a storage platform for kayaks or canoes.

“We’ll be using portable machinery [for installation]. It’s essentially a tri-pod with the drill in the center,” said Davignon.  There would be no heavy equipment required, allowing for the vegetation around the marsh near the property to remain undisturbed.

Most of the questions from the Commission dealt with the types of materials used to construct the walkway and storage platform, which will be largely made out of pressure-treated wood, but environmental contamination would be kept at a minimum.

“All of the timber we’re using is going to be above the waterline,” said Davignon, though there may be some wood drilled into the land nearby.

“We can change those supports to a more green material,” Davignon said.

The hearing was continued until the next meeting of the Conservation Commission on August 8.

The Commission also held a public hearing regarding a notice of intent filed by Sanford Russell, Jr., of 5 Main Street.  Russell would like to replace a carport with a garage, remove a retaining wall, relocating and expanding a boulder retaining wall, reconstruct part of the driveway, and install a trench drain.

Dave Davignon represented Russell at the meeting and was met with several concerns about the plan from abutting residents.

William Rogerson, of 9 Main Street, said that more residents in the neighborhood should have been notified.  He also said that the storm water drain under the proposal is actually on public land.

“You have a drain for a private residence located about six or seven feet into the public way,” he said.

He did not believe that the drain should be covered under any special provisions because it would not be located on private land.  Rogerson was also worried about the possibility of flooding due to the lack of gutters on the proposed garage.  He was also concerned that the plans didn’t include details about the vegetation that may have to be removed or the material used for the foundation of the garage.

Hugh Dyer of 6 Main Street also took issue with the plan for the drainage system.  He said that he believed it would negatively impact local flooding.

In response, Davignon assured the audience and the Commission that they would review the list of notified abutters and make sure that all required notices are sent out.  He also agreed to develop a leaching system for emergency overflow of rainwater.  The Commission voted in favor of Davignon’s request that the hearing be continued until August 8, 2012.

In other business, the Conservation Commission voted to continue the fourth hearing on their agenda, regarding a notice of intent filed by Investors Fund Trust to construct a roadway, cul-de-sac, and storm water management systems to service two single-family houses on River Road.

The next meeting of the Marion Conservation Commission will be held on Wednesday, August 8, 2012, at 7:00 pm at the Town House. 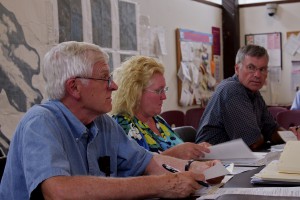