The Marion Zoning Board of Appeals held a public hearing on Thursday, July 26, regarding the application of Sanford J. Russell, Jr., who would like to replace a carport with a garage, remove a retaining wall, relocating and expanding a boulder retaining wall, reconstruct part of the driveway, and install a trench drain at 5 Main Street.

Architect Will Saltonstall, who designed the proposed garage, spoke on behalf of Russell.

“They are proposing to build a two-car garage.  It is their hope to create a structure to store cars, boats, and various things,” he said.  The building is listed as a storage garage on the application.

Saltonstall indicated that there is a significant drop-off in elevation toward the rear of the property near the water, and would be powered only by electricity.  No hookups for sewer or water have been proposed.

Abutter William Rogerson, who lives at 9 Main Street, said that he believed the proposed height of 25 feet is too tall.

“If you look around the neighborhood, most of the buildings aren’t that high,” he said.  Rogerson was also worried about wind tunnel effects sweeping through the neighborhood as a result of the garage’s proximity to a shed on his property.

Gordon Goodwin, of 5 Hiller Street, was also concerned about effects of construction on his property.

“The problem that we’re dealing with now is that we don’t have a view of the foundation, in relation to the proximity of the footing of the property,” he said.  “I’m worried that our property will be significantly excavated in order for them to get a footing.”

He asked that Saltonstall provide some illustration to better disclose how his property may be affected.

“I haven’t seen drawings of the footings myself, yet, but we’ll share them with you as part of this process,” Russell said in response to Goodwin’s concerns.

Hugh Dyer of 6 Main Street was also on hand to add his thoughts to the public record.

“In my view, it is more non-conforming than the existing structure,” Dyer said, citing the size and volume of the proposed garage, and the increase in the footprint of the building as problematic.

ZBA Chairman Bob Wedge said that while the size of the building could be considered more non-conforming, the movement of the footprint back from the existing location creates less non-conformity.

“You can extend that line back as far as you need as long as you don’t exacerbate the problem,” Wedge said.

Due to the amount of questions and concerns raised by neighbors, Wedge suggested that the Russell’s and Saltonstall table the discussion so that they may meet with the abutters for clarification.

“I feel like this is moving in a positive direction, so you can facilitate more communication,” Wedge said.

The ZBA voted unanimously to table the hearing until their next meeting on August 9, 2012, at 7:30 pm at the Town Hall. 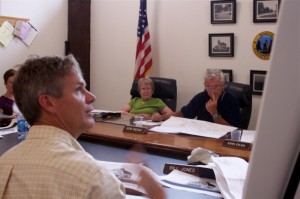