Ask anyone in town where Rick’s Tavern, AKA “the old Brad’s,” is located and they will likely point you toward the small narrow structure nestled at 35 County Road.

The bar has now switched hands and will be called “The Stowaway,” and the Mattapoisett Board of Selectmen on May 26 approved the On Premise All Alcoholic Beverages License, as well as the Common Victuallers License to prepare and serve food, Automatic Amusement Device License for the juke box, Entertainment License for the TVs, and Pool Table License for the pool table that will remain – for now.

Co-owners John Mello of Mattapoisett and Joe Sauro of Wareham told selectmen they plan to renovate the interior, expand the bar, and add food service to the site. They plan to open the bar seasonally, beginning this summer and closing in early winter for renovations.

“We kind of want to get it back to where we remember it,” said Mello. More like the days when the bar was called Brad’s, he specified. “A little bit more welcoming. We just think it’s time to get back to where we were.”

In other matters, entrepreneur Eric Desrosiers of 10 Captains Lane was close to being issued his license for a Class II used auto dealer, but selectmen ordered Desrosiers to withdraw his application without prejudice and reapply to reflect the change of address he requested from his residence to the post office box.

Selectmen had no problem with Desrosiers’ business plan to sell one used auto one-at-a-time online while storing the single vehicle in a self-storage facility with the owner’s permission. Desrosiers also had permission from a Fairhaven garage to service the vehicle. None of the business activities, Desrosiers said, would take place at the residence.

Selectmen were poised to approve the relatively benign request until two residents claiming to be two of several owners of the property opposed Desrosiers’ business plan.

Roger Gibbons told selectmen he found the proposed business a violation of the lease agreement.

“This is rental property … not for business use,” said Gibbons. Vera Gibbons, seated beside Roger Gibbons, said three cars already park on the private lane, and another would create a problem.

Newly appointed Chairman Jordan Collyer told the Gibbonses the address of the business was a post office box, no business would take place on the residential property, and reminded the two that vehicles for sale would be stored off-site.

Vera Gibbons still had a problem with Desrosiers’ plan since “he’s going to have to go in and out of Captains Lane more than usual,” she said, referring to Desrosiers’ need to go to work. “It seems like it would make more traffic.”

Selectmen paused and turned to Town Administrator Michael Gagne to say whether the change of address on the application from 10 Captains Lane to the post office box was a significant enough change to require a re-filing and reposting of the hearing.

Gagne said, although Desrosiers does not propose to change the use of the property, the change in address merits a withdrawal without prejudice and a re-file.

Gagne also recommended Desrosiers submit written permission from both the self-storage facility and service station owners with the application.

Also during the meeting, selectmen approved a Hawkers and Peddlers License to Jaime LeBlanc, owner of Jaime’s Hawaiian Ice, a vintage ice cream cart that might be spotted along Mattapoisett beaches this summer.

Selectmen will switch to the “summer schedule” of meeting once a month beginning with the next scheduled meeting of the Board of Selectmen on June 9 at 7:00 pm at the Mattapoisett Town Hall. 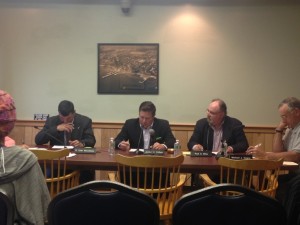