The seats were filled with abutters and neighbors of Kathleen Mahoney of 40 Dexter Road, who proposed to demolish and reconstruct a four-bedroom home on the lot at the Marion Zoning Board of Appeals meeting on Thursday night. Several abutters sent letters of support for the project, while the majority of those attending the meeting spoke in opposition of it.

Mahoney was represented by David Davignon of Schneider & Associates, and presented a revision of the original plan presented at the previous Zoning Board of Appeals meeting held in June. The revised plan showed a different setback at the corner of Dexter and Wilson Roads, an intersection that neighbors said was dangerous for children in the neighborhood. “We’ve pulled the build seven feet from Dexter and 4.2 feet from Wilson,“ Davignon said, “and the driveway is now a single lane, 12 feet off the property line.”

“What is the height?” asked member Betsy Dunn.

“From roof peak to average grade is 32.8 feet,” Davignon replied. The home will sit above the five and a half foot base due to newly enacted National Flood Insurance Act requirements.

“This home is overwhelming for such a small lot,” Karen Molson said. “This opens the door for overbearing homes, which forces the neighborhood to lose privacy and sunlight.” The total lot size is 2,186 square feet and the proposed house would cover 31.5 percent of the lot.

“It appears scale is an issue after hearing from abutters,” Chair Eric Pierce said. The board agreed to revisit the neighborhood and take the proposal under consideration. A public hearing will be held at 8:00 pm on Aug. 8.

In other business, a public hearing was held with Baywatch Realty Trust, who presented revised plans for the 96-unit 40B project, which includes 36 single-family homes and 600 apartments located in two large buildings on the property.

The lengthy wooden bridge access (shading valuable wetlands) to and from the proposed Baywatch Realty Trust (40B) property on Route 105/Front Street in Marion was eliminated from the revised plans presented on Thursday at the Marion Zoning Board of Appeals meeting.

The presentation by Kenneth Steen, of Kenneth Steen Real Estate Inc. and Edward Gless, Existing Grade, representing Baywatch Realty Trust, shows a revised plan eliminating the bridge and presenting a new access, adjacent to The Wave Restaurant recently acquired from owner Todd Zell. The revised plans show an access point coming in and on property adjacent to the restaurant parking area, now in a wooded area. None of the existing parking of the Wave Restaurant would impacted by the project.

The other substantial change in plans, was the roadway in, out, and through the proposed development. The previous roadway varied from 22 feet to 24 feet. At issue was whether a 49 foot ladder fire truck could make its way through the complex, with the existing landscape design, as presented, in an effective and timely manner. The new design has the entire project having a 24-foot street width.

“We needed to have a full 24-foot street width and a 100-foot turning radius for fire trucks that could handle a fire in the area with this density,” said Building Inspector Scott Shippee, Building Inspector. “I’m glad to see that you’ve addressed this concern.”

The board was advised by town counsel Jon Whitten to take the proposal under advisement, rather than approve it, because the town wanted to see the document that shows that the newly purchased land is under agreement and actually purchased. A motion was made to continue the hearing to Aug. 8.

In other business, the board heard from Will Saltonstall and Ginny and Matthew Stelmach Jr. of 5 Spinnaker Ln. to allow the construction of a sunroom and garage addition. Several abutters attended and helped explain the confusion over town water service to the neighborhood. Abutters said that a water service line cuts across the Stelmach’s property and to the north side of the proposed addition. Also, an existing septic system also needed to be dealt with under the new plans. The board agreed to take it under advisement and work to get more details on exactly where the water service connections are on Spinnaker Lane. 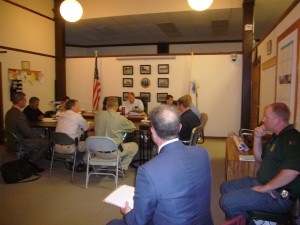