After months of applications, hearings, and quite a bit of contention from local residents, Nils Johnson and Andrea Perry were granted entertainment and victualler licenses for the Inn At Shipyard Park, formerly the Kinsale Inn.

The original public hearing was scheduled for Tuesday, but due to the crowd of concerned residents, which approached 100 people, it was rescheduled and relocated for Thursday night at the Old Hammondtown School.

This has been a hot-button issue for a few months, as speculation feverishly grew over the vision Johnson and Perry had for the Inn, much of which was based upon rumor, conjecture, or misinterpretation of the details of the licenses in the public record.  The fear of many in town was that the Inn would be turned into a nightclub and were concerned that issues of noise and disorderly conduct on the part of late-night patrons would negatively impact the quality of life downtown.

Rumor that the Inn would be transformed into a nightclub were baseless.  “The word ‘nightclub’ was never used in discussions among the Board,” said member Tyler McAllister.

“I want to make it clear to everyone that we will not treat this as a nightclub or dance hall license,” said Board of Selectmen member Jordon Collyer.

Chairman Paul Silva began his remarks by speaking to the specifics of the license so as to dispel any doubt.

“This license is to provide music, dancing, and entertainment between the hours of 8:00 am and 1:00 am.  Ying Dynasty has the same license, so does Turk’s Seafood,” Silva said.

Johnson, who is a Mattapoisett native and resident, and Perry sat in front of the crowd of over 100 people in the Old Hammondtown  cafeteria and began by giving a little perspective on their plans.  They intend on eliminating the Irish-themed fare in exchange for a more fine dining menu, including regional favorites such as little necks with chourizo.

“My grandfather ate at the inn, my parents ate there.  I care about what goes on in this town,” Johnson said.  “We want this to be the reason people visit Mattapoisett.”

Despite the large size of the crowd, only a few people went up to the podium to lend their opinions, much of which was supportive of Johnson and Perry.

“When a young, ambitious person said they wanted to take over the Inn, I was thrilled,” said Pat Donahue of Mechanic Street.  “It’s a very important, vital part of our community. I, as well as many of my neighbors, are delighted that you’re taking enough of an interest and a chance to improve the heart of our village,” she said.

After an hour of discussion, the Mattapoisett Board of Selectmen voted unanimously to grant the entertainment and victualler licenses.  Afterward, Johnson and Perry were greeted by dozens of well-wishers, a happy ending to a frustrating situation.

“There was some embellishment and stories made up over what they thought we would do.  I understand people have concerns because they don’t know me or my business plan. I just wanted them to give me a shot,” Johnson said. 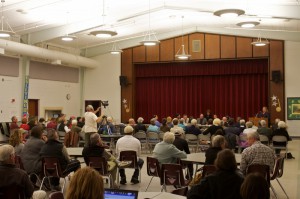