You are here: Home » News » How to Be Prepared For Town Meeting

In a lead up to the annual town meeting and special town meetings that will take place beginning May 12, Mattapoisett’s Board of Selectmen met with Town Moderator John Eklund. Eklund told the board that he needs members of the community to be fully prepared for town meeting in order to preserve the smooth flow of business and to ensure that amendments to articles in the warrant are presented in a manner that meets legal requirements.

Eklund said that if anyone in the public is planning on speaking from the floor with an amendment, he would like them to bring their planned text to his attention so that town counsel can be consulted beforehand. He urged the community to come forward as soon as possible so that legal guidance may be offered as needed. He went on to say that if anyone is planning on using a PowerPoint presentation to present information during town meeting, those presentations must first be vetted by him to ensure they are cohesive, to the point, and no longer than 10 minutes.

Town Administrator Mike Gagne said that the town’s website contains information about the articles in the warrant as well as a video explaining the 2015 budget. This reporter visited the website to get a sense of the information available and found it to be comprehensive and easy to understand. Selectman Paul Sylvia, along with Gagne, provide residents with complete details on the 2015 budget as well as explanations on what some of the more complex line items are, including all expenditures and revenue sources. Go to www.mattapoisett.net and scroll to the bottom for the video link.

Both Gagne and Eklund invited the public to avail themselves of all the information necessary to be fully informed prior to attending town meeting on May 12 (also May 13 and 14 if needed) at 6:30 pm in the ORRHS auditorium.

Gagne also said that the Mattapoisett League of Women Voters is hosting a talk about town meeting and the warrant articles on May 4 at 1:30 pm in the library.

Gagne asked the selectmen for permission to send a letter to the Massachusetts Department of Transportation advising them that the fire and police chiefs, along with the highway superintendent, are in support of not making a bike lane from the pillars at Depot Street to the end of Goodspeed Island for the purposes of the bike path. Given the wetlands bordering the roadway, designating a bike lane would not be feasible he said. However, the state required a uniform response before accepting that as part of the bike path engineering plan. The selectmen agreed and a letter will be drafted for their signature.

In other business, Laurie Trueheart of Hollywood Scoops received a license to open and operate her new restaurant on Route 6 next to Bowlmor, while licenses for Bowlmor and Rick’s Tavern were renewed.

They read into the minutes a letter of resignation received from Raymond Harrington, chairman of the Mattapoisett Historical Commission. It was with regret that the board accepted his resignation, noting his 15 years of outstanding service.

The board members discussed the new sign scheduled to be installed at the re-named industrial park, now known as Mattapoisett Business Park. The new sign will be situated in a better location at the entrance to the park and be constructed of attractive materials with uniform lettering. Gagne applauded the efforts of Tom Brownell and Kim Fields who have worked hard on this project. It was also suggested that electrical service be brought to the sign’s location for future illumination of both the park’s sign and the town’s welcome sign that is located nearby.

Selectman Sylvia asked if the new sign will meet the upcoming by-law changes that the Planning Board will be bringing to the public for consideration. After some conversation, it was determined that the new sign will not be in violation.

The BOS proclaimed April 25 as Arbor Day, notably establishing Mattapoisett as a “tree city” for the eighth year running. The Tree Committee will be planning activities to commemorate the day.

Stephen Cassidy was appointed to the Old Colony School Committee.

Town Hall will be closed on Monday, May 26 for Memorial Day with observances taking place at 1:30 pm in front of the library.

During the summer months of June, July, and August the selectmen will meet only on the second Tuesday at 7:00 pm. Their next scheduled meeting is May 27 at 7:00 pm. 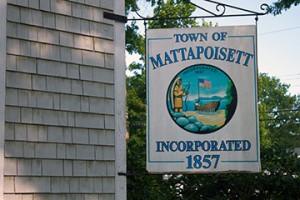