You are here: Home » News » Harbormaster Transition Under Way

Members of the Mattapoisett Board of Selectmen interviewed three potential candidates Wednesday for an opening for the town’s Harbormaster position.

Selectmen’s questions revolved around concern over the applicants’ ability to handle different types of vessels, as well as willingness to be on-call and to be fully devoted to the job during boating season and experience in customer service.

The job’s busy season is from early May to late October, when most boating activity takes place.

All three candidates seemed highly qualified for the position, with officials saying that the Mattapoisett Marine Advisory Board had previously narrowed the group of three down from a group of 11. Ultimately, the decision of who to hire is up to the Board of Selectmen.

“It goes to the quality of the top three people,” said Alan Gillis, Chair of the Marine Advisory Board.

The group hopes have someone in the position by July 15. 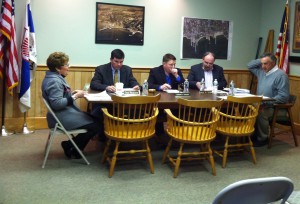