The natural “letting go” of an old cranberry bog area known as the Grassi Bog drew heavy attendance and much discussion at the Marion Conservation Commission’s meeting last Wednesday evening.

The bog and land surrounding it lays parallel to Route 6, near the Rocky Neck subdivision and all along the area beyond. The applicant, Marion Open Space Acquisition Commission, ﬁled a Notice of Intent to replace existing water control structures in order to maintain the pond and emergent marsh.

The plan is to do away with the eight man-made sluiceways, dikes, and water containment structures and other obstructions and let nature have its way. Several abutters attended and asked about the water levels resulting from the removal of the man-made containment areas, which are in disrepair and not monitored on a regular basis.

Robert Grey, of Sanatia, Inc., spoke on behalf of the Marion Open Space Commission and showed photos and drawings of the plat and the changes that would take place over time, as nature would take over human control of the bog area. “The plan is to re-establish the natural water system that was here prior to the bog,” Grey said.

In essence, the plan showed three manmade dikes or waterways that will be removed, thus returning the area to its natural ﬂow and state. “Structures will be removed and our intent is to restore the passage of ﬁsh that should ﬂow through the area,” Grey said. The area is also considered a habitat for the endangered species of the Eastern box turtle.

Various abutters, including Joe and Bonnie Pavia spoke and said that they mowed the pathway around the area. “We’ve been mowing the area for years, and want to know what will happen to the current maintenance of the property,” Joe Pavia said.

The board told the abutters that there were requirements, out of their control, that governed what and how mowing and other maintenance of the property could happen.

Chris Bryant, representing the Sippican Lands Trust, voiced approval of the project saying that the group is “very much behind the project.”

In other business, the board discussed a Request for Determination of Applicability to construct a dwelling, a driveway, and a sewage disposal system with associated grading at 50 Holly Pond Road by Amy Moor. Steve Carvalho of Thompson Farland represented the applicant.

“We explored the area for ledge … did not ﬁnd it, so we are proposing a foundation as is,” Carvalho. Two retaining walls consisting of large boulders will be built.

Tabor Academy was next up, with a Request for Determination of Applicability to construct a 35-by-78-foot indoor rowing tank building addition and a 25-by-35-foot outdoor workout area on the northeast side of the gymnasium building. At issue was roof run-off, which would be diverted to a catch basin. The board agreed to take the request under consideration.

The last item on the agenda was a request for a Notice on Intent for Kathleen Mahoney of 40 Dexter Rd. to construct a 4-by-133-foot timber boardwalk and pier, a 3-by-20-foot gangway, and a 10-by-20-foot ﬂoat supported by four pilings. The board debated the request and wanted to have a report from the shellﬁsh warden regarding the impact on shellﬁsh in the area of construction. 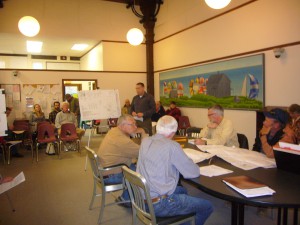