You are here: Home » News » Full Agenda for Board of Selectmen

With a full agenda on their first fall meeting, the Mattapoisett Board of Selectmen got right down to business on September 23.

One delicate matter was discussed early in the meeting. During the September 9 State Primary, newly-elected Town Clerk Catherine Heuberger apparently made an error that has left those election results pending state certification. Town Administrator Michael Gagne presented a letter to the selectmen, which after being approved and signed by Chairman Paul Silva, will go on to Representative William Strauss and Senator Marc Pacheco. Once their signatures join Silva’s, the request for special certification of Mattapoisett’s election results will go to the Governor for his seal of approval. Silva signed the document.

Coming before the board was Harbormaster Jill Simmons, who reported that with the assistance of a Boy Scout working towards his Eagle badge, she will be building a kayak storage area along the edge of the grassed park situated next to Munro Preserve. She noted that more kayak storage is something the community needs.

Chief Mary Lyons met with the Selectmen to discuss staffing issues that have driven up overtime costs. Lyons said that there is one full-time position open on the police department that equates to 21 shifts per month that require filling. She said that this has added up to $11,000 in overtime wages. Lyons wanted the board to consider filling that full-time opening now to save the town money. Silva asked for a cost analysis because he was not fully convinced that filling that opening would, in fact, save the town money, citing benefit packages and retirement costs. Gagne will report back to Silva with that data. Lyons also said that Shawn Parker had graduated from the police academy. Mattapoisett’s police department is staffed by 16 patrol officers, five reserve officers, a captain and the chief.

Lyons reported that several breaking and entering cases were solved and stolen goods recovered. The police department also identified the two youths who were involved in the theft of copper pipes from Center School, although the pipes themselves have yet to be recovered. Those individuals are now going through the legal system.

It was announced that liquor stores may now open at 10:00 am on Sundays due to new state legislature. Local stores will need to petition the Board of Selectmen to request a change in hours of operation.

Gagne also reported that meetings with ORR school committee members and Tri-Town government leaders have begun. There are four areas that this newly launched group will cover: 1) appropriate use of free cash; 2) development of a stabilization fund for capital expenses; 3) OPEB/other post-employment benefits; and 4) development of a reserve fund for unforeseen expenses.

Regarding the use of the open space resources at Ned’s Point, Gagne said that he has received concerns and negative comments due to the increasing number of large group gatherings taking place there. He suggested that, over the winter months, the selectmen review how the space is managed to ensure fair and equal use to all people.

Gagne and Selectman Jordan Collyer have also been working towards developing policies for ‘film and movie’ production within the town. Collyer had attended a seminar that urged cities and towns to protect their town with written policies. Gagne shared a copy of the policy used in North Andover as a starting point for crafting the town’s version.

He also said that research and experiments that have been conducted on oyster farming at Pine Island Pond have produced great results. Kevin McGown, a student from the University of North Carolina with a focus on invertebrate studies, has been working with Shellfish Warden Kathy Massey. They now have 50,000 healthy oysters that need to be dispersed throughout the pond. They are seeking volunteers to assist over several consecutive Saturdays. Visit www.mattapoisett.net for more information on volunteering.

The selectmen approved a one-day liquor license to the YMCA for a fundraising event on September 26 and a one-day use of the landfill site (as an alternate location) to the Pilgrim Sand Trail Riders on November 9 from 7:00 am to dusk.

The next meeting of the Mattapoisett Board of Selectmen is October 14 at 7:00 pm in the Town Hall conference center. 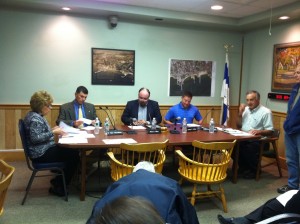