Once two members thawed out from walking to the meeting, the Mattapoisett Finance Committee got down to the business of town business. The first order of business was revisiting Fiscal 2013, studying the actuals in preparation for crafting the 2015 budget. They also compared the FY14 budget against FY13 actuals in order to understand growth projections and line item increases. The town came in at $21.75 million for FY13 and has budgeted $22.45 million for FY14, an increase of 3% year over year.

State aid from the Chapter 70 program (The Chapter 70 program is the major program of state aid to public elementary and secondary schools. In addition to providing state aid to support school operations, it also establishes minimum spending requirements for each school district and minimum requirements for each municipality’s share of school costs; http://www.doe.mass.edu/finance/chapter70/) was $22,000 more in FY13 than the previous year and was budgeted for a 2% increase in FY14 to be actualized at the end of the fiscal year in July. Revenue sources were detailed as: 7% local receipts; 3% fund transfers; 4% Cherry Sheet; 6% debt; and 80% total levy. (The Cherry Sheet is the official notification by the Commissioner of Revenue to municipalities and school districts of estimated state aid to be paid and charges to be assessed over the next fiscal year. As the state budget process unfolds updated local aid proposals are posted. Cherry Sheets are issued once the state budget is enacted by the Legislature and approved by the Governor; http://www.mass.gov/dor/local-officials/municipal-data-and-financial-management/cherry-sheets/).

Town Administrator Mike Gagne had just received the Governor’s budget that includes the Cherry Sheet estimate for FY14 ($1,148,000) and proposed sum for FY15 ($1,238,000). Even though the FY15 sum is slightly higher than FY14, Gagne cautioned the board to not spend the money yet, reminding them that the house and senate also have budgets that may, and often do, severely impact anything a governor may put forward. He said, “We just don’t know what to expect.”

Gagne told the committee that the Affordable Care Act will cost the town approximately $155,000, adding an additional 8% to FY15 budget needs, along with a pension liability assessment of $56,000.

There was considerable discussion regarding school budgets, with increases expected from all schools serving the town. Chairman Pat Donoghue said that some discussions have taken place with the school superintendents, but that they needed to speak more directly with those school committee members working on budgets. Gagne said that there is a planned Tri-Town summit meeting with board of selectmen members, town administrators, Finance Committee members, and school officials in an effort to collectively face the financial challenges on the horizon. Gagne also discussed some reimbursement from the state’s Circuit Breaker program, but expected it to be underfunded again this year. (The state’s Special Education Circuit Breaker program reimburses local school districts for a portion of their costs for educating severely high-needs special education students. The state reimburses a portion of district costs above a certain threshold and the precise reimbursement formula changes year-to-year depending on the total amount allocated for this line item in a given fiscal year and on the level of claims statewide.

The Circuit Breaker program was started in FY 2004. The threshold for eligibility is tied to four times the state average foundation budget per pupil as calculated under the Chapter 70 education funding law. The state aims to pay 75 percent of the costs above that threshold, but for many years during the state fiscal crisis reimbursement rates were below the 75 percent level. Included in this funding is an earmark for a special program run in conjunction with the Department of Developmental Services. Funded at $6.5 million in FY 2014, this program supports approximately 480 children receiving special education who are also eligible for services from DDS, who live at home, and are between the ages of 6 and 17 at the time of enrollment. The intent of this program is to allow students to return home from a residential placement or prevent students from moving into residential placements; http://children.massbudget.org/special-education-circuit-breaker).

With all this data as the backdrop, it was clear that sleeves will need to be rolled up and department heads given guidance in order to present at town meeting a budget that voters can accept. The Finance Committee will begin the process of meeting with the town’s department heads on Thursday, January 30 at 6:30 pm. 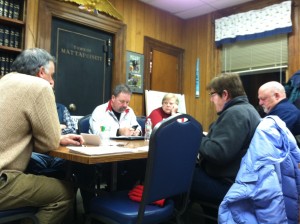