Murphy the dog is safe and warm tonight, but on December 20, Rochester firefighters and EMTs rushed to a cranberry bog off Sarah Sherman Road in Rochester to rescue poor Murphy who had fallen through the thin ice.

Although Jeff Eldridge called it “just another day” for him as a Rochester firefighter, it was no ordinary day for Murphy and witnesses of the rescue which had Eldridge crossing 300 feet across the water on top of an ice sled to reach the Brittany spaniel who had broken through the ice and could not escape.

Hours prior to the incident, Murphy had run off from his family and was not heard from or seen until someone walking near the bog heard Murphy’s yelps for help and called 911.             According to Eldridge, a second dog was spotted at the scene barking, but ran off when help arrived. Eldridge credited the dog for possibly helping to alert others to Murphy’s whereabouts from his loud barking.

A helicopter overhead captured the rescue on video as it unfolded, and Eldridge could be seen hoisting a willing-to-be-rescued Murphy onto the ice sled, and the two were quickly pulled to the edge where EMTs were waiting to take Murphy to the ambulance for treatment and warming.

“He was in trouble,” Eldridge said during a phone interview with The Wanderer on December 24. “The dog was fine and he went along for the ride.”

Animals falling through the ice and becoming trapped are not uncommon occurrences in Rochester this time of year, Eldridge said. He’s rescued dogs before, as well as five or six deer during his time with the department. Eldridge said he has only participated in one rescue of a human who had broken through the ice on Snipatuit Pond.

“It doesn’t matter if it was a dog or a person and anyone else. It’s what we do,” said the humble hero.

It surprised Eldridge that the story had reached the news in Akron, Ohio, and local television news sources were also reporting on the rescue and broadcasting the helicopter video footage.

Eldridge said he was glad there was a happy ending to this story and that Murphy was now back safe with his family.

“I never met the people who own Murphy, but to see the kid on TV happy his dog was home, it was a really cool ending. Seeing the dog running through the yard with the boy – I think that’s the best part about all of it.” 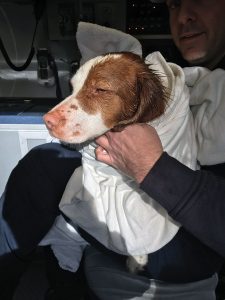 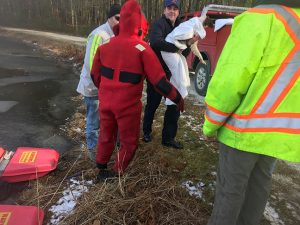 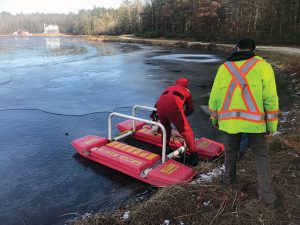