Committee members lashed out at Fire Chief Thomas Joyce over his “unwillingness to cooperate,” and for not providing “timely and accurate information” about the actual cost of the fire engine.

FinCom member Jeffrey Dickerson wondered why the Town does not just “get us a chief that can collaborate with the Town.”

According to Dickerson, the committee has spent 70 percent of its time on 12 percent of the budget – the Fire Department budget.

“This isn’t a witch hunt, guys. Look at the time we spent on this,” said Dickerson. “And it’s not just about the fire engine.”

Dickerson argued that Joyce lacks transparency and, when pressed for information, “he gets defensive.”

Minard said that a couple of weeks ago he began looking into quotes for new fire truck pumpers like the one Chief Joyce seeks to purchase. He said he found quotes for roughly $290,000. So why, he asked, is the one Joyce is requesting estimated at $540,000?

Show me the specs, said Minard, and by specs, he meant the seating, the color, and why the proposed fire truck requires a stainless steel frame.

Minard said the chief got the verbal $540,000 quote through hearsay, and there is no hard dollar quote from any official bid.

“How is it that we can have an article in the warrant without a formal quote in hand?” asked Minard. Last year, he said, the article was turned down for the same reason. “And now, a year later,” he continued, “we’re still jumping around.”

And there is a question on the ballot with no specified number, said Minard, “which I still think is wrong.” How could anyone vote for a fire truck that could be $500,000, or $1 million, he asked?

Dickerson did his own research and found several bids in the low $200,000s for a fire truck with a pumper, prompting committee members to question the necessity of a stainless steel frame.

“I’m going, ‘hmmm?’ Do we live in such a caustic environment that we need a stainless steel frame?” asked Minard.

“Marion always has to buy the Rolls Royce option,” said a cynical Dickerson. He wondered why the Town even needed a new fire truck pumper when “99 percent of the residences in Town are covered by hydrants.”

The committee recalled a prior estimate from the fire chief on how much the Town could get for a trade-in with the old fire truck pumper, and the chief said about $2,000. Dickerson said in his research he found that, today, the Town could get roughly $50,000 for the trade-in.

“I’m not Archimedes, but I think we should wait another two years and get $100,000 for it,” said Dickerson sarcastically.

“I think we should stand against [the article] like we did last year,” said Minard. “And we should get the selectmen to stand up, too.”

Dickerson said he has had enough. “We’ve been here for over a year. A year!” said Dickerson.

Minard said no one with whom he has spoken understood why the Town needs the new decked-out engine.

“Is it just boys with their big red trucks?” asked Minard. He said he plans to express in his letter to the selectmen that they, as a Finance Committee, “are violently against [the article].”

“Otherwise, we just embarrass the chief on the Town Meeting floor, and so be it,” stated Baldwin.

Let us stay in our own “swim lanes,” suggested Dickerson, and move away from personnel issues and stick to finance.

The committee voted in favor of Minard sending the selectmen a letter expressing the committee’s likely intent to oppose the article at Town Meeting.

The Finance Committee was unsure of their next meeting date, but spoke about possibly attending the Board of Selectmen meeting next Tuesday, May 6 at 7:00 pm, but nothing was decided. 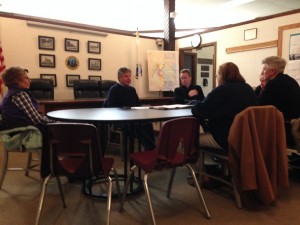