You are here: Home » News » FinCom Chats About Town Affairs

The Marion Finance Committee on December 17 approved a $6,800 budget transfer to pay for a new roof for the recreation building at 13 Atlantis Drive before Chairman Alan Minard lightly touched upon other town matters.

The cost for the new metal roof at the rec building was lower – to the tune of $12,000 lower – because most of the work would be done in-house, said Minard.

As the committee and the town switches gears into budget season, the committee expects to see a rough draft of the budget by Finance Director Judy Mooney by January 20, and Minard said the general sense of what is happening now at the Town House is that Town Administrator Paul Dawson will soon put out requests to department heads and town boards and committees for fiscal year 2017 budgets.

“The push is on to get the raw data in earlier,” said Minard, “because it’s been really lagging behind some of these years.”

Minard told the committee that the Old Rochester Regional schools would present a budget on March 4, which did not sound like a good idea to some committee members.

“That’s just too late in the process for all three towns,” Minard commented. “It’s just not a good idea.”

“I highly recommend that they go for a [Proposition 2½] override,” said Minard.

The committee briefly discussed the matter, and some members had some casual criticism of Old Rochester Regional High School Principal Michael Devoll’s organizational skills, given that he feels he needs a second vice principal for roughly 700 students.

The committee suggested the position would put a $175,000 dent in the budget, including salary and benefits.

The committee also briefly talked about upcoming big-ticket items for the town such as the town house renovation and the tentative wastewater treatment plant upgrade.

“There’s been a bunch of talk going on, but no resolution to anything,” said Minard. “Where that’s going to come out, I have no idea.”

Minard said he heard that any upgrade to the wastewater treatment plant, including possibly draining and lining the three lagoons, wouldn’t commence until 2018. Baldwin gasped.

The next meeting of the Marion Finance Committee will be scheduled in January as needed. 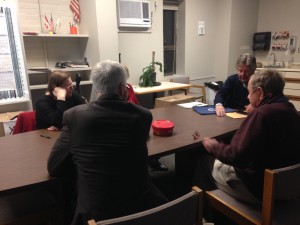