For many months, the Rochester Conservation Commission has tried to get two property owners into some sort of reasonable compliance with wetlands protection laws, and ever so slowly it now appears that the commission is gaining ground.

The July 21 meeting started after commission members returned from a site visit to property owned by Robin Baptista of 78 Alley Road.

Conservation Agent Laurell Farinon outlined the extent of the violations. In back of the house, grading and earth movement was done in the 100-foot buffer zone. Farinon said no permits were requested and, after being ordered to stop and directed to file appropriate applications, Baptista continued earthworks in jurisdictional areas.

Ford described 2,400 square feet of wetlands in one location that have been disturbed by Baptista, an area under the control of the commission. He said that an additional 476 square feet in another location has also been disturbed.

Ford said Baptista wished to return the 25-foot no touch zone to a natural state by re-seeding with a wetlands mixture.

Commission member Michael Conway expressed concern over a utility pole situated within the 25-foot no touch zone. He said, in his estimation, the pole should be removed along with all associated electrical wiring.

Commissioner member John Teal said, “My inclination would be to leave it…. It will be more trouble to move it.” That led commission member Laurene Gerrior to say, “It’s wrong, and everyone else has to do it right.”

Ford replied to these statements, saying, “I think it does no good to move it.” Baptista told them that the pole had been there prior to his owning the property. That issue was then dropped.

ConCom member Kevin Cassidy said he wanted to see something more than siltation fencing along the no touch zone. Farinon said the fencing has been installed incorrectly and would need immediate attention.

“The fencing is a high priority … backed up by wattles or hay bales,” said Farinon.

The plans submitted were inconclusive regarding what type of demarcation Baptista intended to install along the no touch zone. In the absence of that, and the need to repair the fencing, Farinon suggested that the hearing be continued. The commission agreed.

Then came the Lalli enforcement order. Travis and Dustin Lalli have been before the commission and given directives to repair earthworks, to cease and desist activities affecting wetlands on the property, and come up with engineered plans, including engaging a wetlands scientist.

Farinon reported that she met with Travis and inspected the areas that he had backfilled with the ConCom’s approval. She attested that the work was done well. She also said the Lallis’ attorney, Andrea McKnightly, sent a letter stating that Outback Engineering has been engaged by the brothers to help them prepare necessary data for the commission.

Both matters were continued until the next Rochester Conservation Commission meeting scheduled for August 4 at 7:00 pm in the Rochester Police Station conference room. 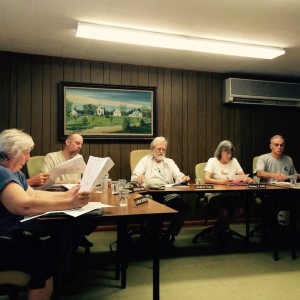