Three of the 11 articles on the warrant dominated the discussion at Marion’s Special Town Meeting held on Monday evening at Sippican Elementary School.

The Solar Bylaw (Article S10) was second to last on the warrant, and those interested in the issue stayed to vote. Much discussion was heard on the floor and at the microphone, with some residents asking questions and some speaking about solar helping the planet survive. Others spoke and said that the article didn’t answer all of their questions.

The range of discussion was healthy and educational for all who attended. Moderator David Titus asked for a vocal vote and quickly said that a hand count was needed.

At almost 10 pm, a hand count was held to decide the issue. It passed, as presented in the warrant. The hands up count, with required a two-thirds majority, won with a count of 97 for and 27 against.

Article S4 also dominated the floor. Article S4 asked the town to vote to raise and appropriate or transfer from available funds in the Treasury the sum, not to exceed $329,108 to supplement the Fiscal Year 2014 Fire Department budget for the purpose of augmenting ambulance staffing and related expenses; or take any other action thereon.

The issue at hand was the way the town of Marion handles 911 ambulance calls. The town will lose their license in February of 2014 due to not meeting state standards regarding response times.

Several residents noted the aging population in the town and that calling 911 is a consideration that many take for granted. Statistics were given, by both the town representatives and residents who spoke up and said that the town needs to resolve the issue. Currently, a 911 call from Marion could result in up to an 14-minute response, possibly a life or death situation, as noted by several individuals who spoke at the town meeting.

Much discussion ensued. A voice vote agreed with the Finance Committee’s recommendation to place the funds for exploration for a solution under the Selectmen’s direction. The intent, as presented by the finance committee, is to have the Selectmen be involved in how the town resolves the ambulance and 911 response to residents.

The third issue that garnered much discussion was Article S9, which was defeated.

The proposal would have created a bylaw substantially enabling the Police Department to conduct State and Federal Fingerprint Based Criminal History checks for individuals applying for licenses for: hawking and peddling or other door to door salespeople, manager of alcoholic beverage license, owner or operator of public conveyance, dealer of second-hand articles, pawn dealers, hackney drivers and ice cream truck vendors.

A local boat yard owner, who occasionally sells used boat trailers, objected to being fingerprinted. He spoke and said that the article would deter businesses from coming into Marion. “So we sell a couple of used boat trailers, so now I’m fingerprinted and in the FBI database, I’m uncomfortable with that,” he said. “This deters other businesses from coming into town … we want to encourage business, not deter it.”

In other town meeting business,

Article S2 was defeated. The article proposed to appropriate $22,700 from Historic Resources reserves to Thomas O. Dexter for architecturally correct windows as part of the restoration of the Old Dexter Homestead at 366 Delano Road. Much discussion ensued with several residents rejecting the idea of Community Preservation Funds being used for residential property, with no access to the public on the property. Judith Rosbe, speaking on behalf of the Sippican Historical Society, said that the request came before their board and was rejected, due to the residential nature of the project.

Article S3 asked the town to vote to act upon the recommendation of the Community Preservation Committee to appropriate $13,640 from Open Space Reserves to enhance access for five Open Space Properties including Grassi Bog, Goldovitz Bog, Washburn Park, Eastover Farm, and Mecke Woods. After a comprehensive explanation of how the funds would improve public access, including parking, voters approved the article.

Article S5 asked the town to vote to raise and appropriate or transfer from available funds in the treasury the sum of $50,000 to be expended by the Department of Public Works for well exploration in the area of the town owned Perry Hill Station on New Bedford Road in Rochester.

Article S6 asked the town to vote to raise and appropriate or transfer from available funds in the treasury the sum of $41,330 to be expended for the purpose of upgrading lighting and sensors at the Wastewater Treatment Plant to more efficient units.

Article S8 asked the town to vote to amend the General Bylaws of the Town of Marion by deleting Article XXI – “Solicitation for Contributions or Commercial Purposes” in its entirety and inserting in its place a new bylaw. The new bylaw’s purpose is to clarify and put restrictions on those soliciting for contributions or commercial purposes, especially in a door to door situation. The new bylaw includes new definitions for terms such as “Hawker and Peddler” and “Transient Vendor and Transient business.”

Article S10 asked the town to vote to amend the Zoning Bylaws of the Town of Marion by creating a Solar Bylaw. The town warrant included 10 pages with the wording of the Solar Bylaw.

Article S11 asked the town to vote to amend the Zoning Bylaws of the town by deleting a paragraph and replacing with new wording creating a Floodplain/Flood Hazard District. The District includes all special flood hazard areas within the Town of Marion designated as Zone A, AE, AO or VE on the Plymouth County Flood Insurance Rate Map issued by the Federal Emergency Management Agency for the administration of the National Flood Insurance Program. 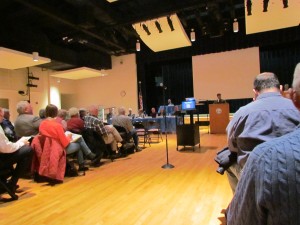