The Rochester Planning Board was unwilling to wait – a second time – for a tardy arrival of the engineer of the large-scale solar farm slated for the center of Rochester. Instead, Planning Board member Ben Bailey suggested the board cease waiting for him and continue the January 26 meeting until February 9.

This came just moments after the board denied Amelia Tracy of Renewable Energy, LLC her request that the board issue a positive vote that evening in order to meet a recently accelerated deadline of a state program for financial incentives on solar energy investment projects in Massachusetts.

Tracy said she learned only ten minutes prior about the abrupt change in the solar regulations of the solar program, which she said often change without notice. The new deadline, she said, was next week.

“We are now on a tight timeline to finish this project,” said Tracy. “That’s the reality of our industry. For us to get a vote tonight would be the best possibility for us.”

Bailey was unsympathetic. He suggested the program was all about tax credits and “government handouts.” When Tracy stated that the program would qualify the project for a “solar renewable credit program,” Bailey called it “baloney.”

“It’s incredibly important for us to get a permit tonight if possible,” Tracy reemphasized. “It’s a really big deal for us. I just wanted you to know that this is the reality for us.”

Planning Board Chairman Arnold Johnson told Tracy the board had still not received the peer review reports from its hired engineer and, given that Renewable Energy changed engineers only recently in the middle of the application, there was no room for any “give and take.”

In addition, said Johnson, the Natural Heritage & Endangered Species Program concerns were still pending. Johnson reiterated that the board’s policy is to refrain from making decisions before Natural Heritage finishes its own matters, lest the approved plan be subsequently changed.

“We could get through all our stuff. We could close the public hearing,” and the board could wrap up all loose ends of the project, Johnson said, “but we still won’t be able to take a formal vote on it until Natural Heritage is done.”

Furthermore, Johnson said decommissioning concerns still lingered and, with the project’s addition of a landscaping architect into the mix, a hasty vote was impossible.

“We don’t like to waste anyone’s time,” Johnson said sounding sympathetic. “When our time is right, we like to write very good decisions.”

Johnson said that, realistically, Tracy would be looking at a final vote in March.

Abutters and neighbors in attendance expressed frustration over a Rochester Board of Health public hearing that residents reported was held back on January 13, just one day after the prior Planning Board hearing when Tracy first learned the project would require a Board of Health waiver pertaining to the proximity of the project to a nearby septic leaching field.

Resident David Watling said that when he inquired with the Board of Health about Renewable Energy’s public hearing, he learned that Renewable Energy was never placed on the agenda, the public hearing was not legally posted, and no abutters were notified – contrary to what Town Counsel Blair Bailey told residents the night of the last Planning Board meeting on January 12.

One resident said she was called two hours before the Board of Health meeting and informed about it. Others said the meeting happened without them knowing.

By that point in the meeting, Tracy was unable to tell the board when she expected the engineer to arrive. Bailey called the situation rude, and he quickly motioned to continue the hearing until February 9. Some residents expressed subdued joy, and the meeting was adjourned.

Also on the agenda, the public hearing for a special permit for Melink Corporation for a solar energy facility off Snipatuit Road was immediately continued until February 9 at the request of the applicant.

Johnson quickly referred to yet another application being tentatively submitted for another solar farm in Rochester, this time on Marion Road by the old airport property. This, said Johnson, would make solar farm number six for the town.

The next meeting of the Rochester Planning Board is scheduled for February 9 at 7:00 pm at the Rochester Senior Center on Dexter Lane. 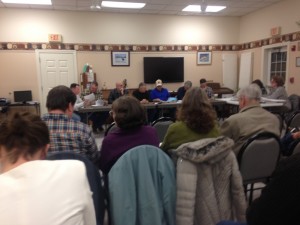