You are here: Home » News » Easy Approval for Special Permits

With no opposition from board members or abutters, the Mattapoisett Zoning Board of Appeals approved two petitions for special permits during a swift meeting on September 18.

Christian and Bashawn Thorell of 23 Brandt Beach Avenue were granted a special permit to add a 12-foot by 15-foot sunroom to their home, as well as a master bathroom and master walk-in closet. The project required a special permit for a shortage of 10 feet of the required 30-foot setback.

Architect Gary Brackins presented the site plan to the board, stating that the addition would result in a 10-foot shortage in the setback, but Building Inspector Andrew Bobola noticed that the plan proposes a 23-foot setback. Brackins explained that the design reflects a three-foot extended rake of the second-floor gable, but as Bobolo pointed out, the walls of the building would create a 23-foot setback, a more favorable scenario.

“So it’s not quite as dramatic as it sounds,” stated Bobola, calling it an “adequately proposed addition.” He added, “It’s not huge by any nature.”

There were no abutters present and no questions from the board, but ZBA member Paul Milott wanted the board to acknowledge before voting that the original house was built in 2009.

“Now we’re here five years after it’s built and we’re sort of going in the wrong direction,” said Milott. He then stated that he found no reason to deny the special permit.

Bobola commented that the proposed 10-foot by 13-foot interior room was not a big deal.

“You’ve seen some of the monsters that have come through here,” said Bobola.

The vote to approve was unanimous.

Also during the meeting, the board approved a special permit for Joanne O ’Day to build an 8-foot wide deck off her 8 Linhares Avenue home. The deck would result in a shortage of about 6 feet on the east side of the property.

O’ Day described her plan as a simple plan, and Bobola commented that it was a reasonable request that would not create a negative impact on the character of the neighborhood.

“I support Joanne’s project because it was thoughtfully done,” said abutter Ed Walsh of 4 Linhares Avenue. He said the majority of the homes in the neighborhood already have decks. “It will blend very well.”

Milott stated that he found nothing negative about the project and other board members said they were fine with it.

The vote to approve was unanimous. 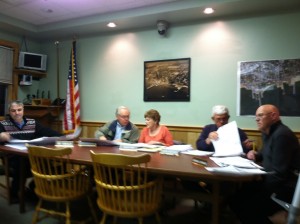