You are here: Home » News » Dogs Continue to Cause Nuisance

The incessant barking from a residential kennel remains ongoing after over a year of complaints, and the Rochester Board of Selectmen offered no concrete solution for the matter, choosing instead to take the issue under advisement and consult with town counsel before taking action.

Neighbors of Liberal and Melinda Teixeira of 368 North Avenue testified August 25 before the selectmen that the dogs belonging to the couple continue to cause a nuisance with their barking. Since June 20, 2014 neighbors have called in over ten complaints to police about the noise that one neighbor called “extreme.”

“We’ve tried to be good neighbors,” said Rosemary Boling who lives across the street from the Teixeira property. She said she did not want to call in complaints about the noise and wanted to work with the neighbors, “but this has just been so ongoing.”

Boling offered to play some recordings she took of the dogs barking for the selectmen, one of which she said was over an hour long; however, selectmen instead took neighbors’ word for it after hearing testimony from several of Teixeira’s neighbors.

This was not the first time the Teixeiras and their neighbors have come before the board regarding a dog nuisance, which dates back to September of 2013 when the Teixeiras had beagles in their kennel, which have since been removed. Selectmen offered the Teixeiras a chance to mitigate the noise, which they attempted to do by removing a number of beagles, moving the kennel 300 feet back from the house, and using bark-deterring collars and additional fencing.

Attorney Robert Moore, representing Melinda Teixeira in the absence of Mr. Teixeira, spoke for Teixeira, saying the couple seeks to resolve the problem.

“We don’t know what else we can do,” stated Moore, adding that the Teixeiras are not “calloused” and want to correct the situation. He said Ms. Teixeira recently looked into taking dog instructor classes to train the dogs not to bark as a possible solution to the problem.

The Teixeiras currently have a license to keep one small dog kennel and one hobby kennel, allowing for a total of 16 dogs on the property. They run a dog breeding business, but under the law, over four litters of pups per year are prohibited.

Selectman Naida Parker asked Teixeira how many litters there were last year, and Teixeira admitted that there was probably over four, but she could not recall how many.

“Then it rises above the hobby kennel license threshold,” said Parker. “And most people I know, know how many litters they’ve had over the year.” She said she found Teixeira’s answer possibly “disingenuous.”

Moore struggled to explain that the Teixeiras, although they breed dogs for profit, are not an actual commercial dog kennel, which requires Zoning Board of Appeals approval for a commercial business within a residential zone. He said the dog hearing was “a little intimidating” for Teixeira, which is why he was present that evening.

“It’s an open book,” said Moore. “And if we’re not in compliance then we will be.”

Parker referred to a kennel on Snipatuit Road that is a fully-enclosed structure where the dogs are kept indoors throughout the year, as opposed to the Teixeiras’ material “greenhouse-like” structure, which is more sound permeable.

“That’s the level of familiarity I’ve had with commercial kennels,” stated Parker.

Abutter to the Teixeiras, Bill Nazarro, said he barely hears the dogs bark, and blamed wildlife such as deer and turkeys for inciting the dogs to bark.

“I think it’s really quieted down,” said Nazarro, adding that he was the closest neighbor to the kennel – however, neighbors voiced their disagreement.

Alan Boling said the bottom line is that the solutions the Teixeiras previously offered up simply are not working, and the barking continues during the early morning hours as well as late at night.

“[The barking] goes on all day long. This is tough. And you can’t get back to sleep,” said Boling. “There’s just too many dogs, which is causing the barking and causing the problem.”

Moore suggested the Teixeiras head toward a fully enclosed kennel as a solution, while Chairman Brad Morse suggested ordering the Teixeiras to apply for a commercial kennel license with the ZBA.

“The system that’s working now … doesn’t seem to be working,” said Selectman Richard Nunes, adding that it must be solved. “It isn’t something that I would ever want to go through,” continued Nunes. “It is what it is – and it’s a mess.”

Nunes made a motion to compel the Teixeiras to apply with the ZBA, then retracted his motion for one allowing selectmen to take the matter under advisement, seek counsel, and continue the hearing until the next meeting.

“As the whole town knows, I’m a dog person,” said Parker. “I’m not anti-dog and I’m not anti-kennel … but it has to comply with the neighborhood.”

Morse apologized to those in attendance, saying he was sorry the board could not act faster to resolve the issue.

“We are doing our best,” said Morse. The hearing was continued until 7:10 pm on September 15.

Also during the meeting, the board greeted new Superintendent-Director of Old Colony Regional Vocational Technical High School Frank Cote, as well as several other new staff members at the school.

“I’m excited to be the new superintendent – I think more so than anything else,” said Cote. “I look forward to a long relationship with Old Colony.”

The board also decided to put setting a date for a Special Town Meeting on the agenda for the next meeting, scheduled for September 15 at 6:30 pm at Town Hall. 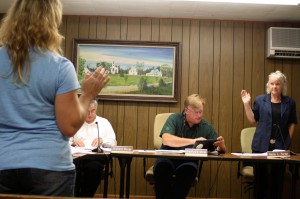