You are here: Home » News » Detour, Not Shortcut for New Cell Antennas

The representative for Bell Atlantic Mobile, on behalf of Verizon, hoped the Rochester Zoning Board of Appeals would overturn the building commissioner’s denial of a building permit to add 12 new cellular antennas to an existing tower off Cranberry Highway to expedite the project by circumventing site plan review with the Planning Board; instead, a hesitant board continued the matter until well into November.

Attorney Victor Manougian said the town’s zoning bylaw that requires site plan review for projects that exceed $25,000 steps on the toes of a more recent federal FCC rule meant to help cell antenna installations progress more swiftly. Arguing that there would be no alteration to the height of the tower and no substantial expansion of structures, Manougian asked the board to overturn Building Commissioner James Buckle’s decision to deny the building permit. He said the town would still maintain oversight of the project in areas such as electricity and safety and code issues.

The board expressed concern and skepticism.

“What you’re really asking for is a waiver on the time frame … as far as site plan review goes,” said ZBA Chairman Richard Cutler. He asked Manougian, if there was such a rush, why didn’t they file the project application sooner?

Manougian said the project had to pass through several regulatory processes at the federal level.

“My Verizon bill is outrageous, but that’s beside the point,” joked Cutler. “I really don’t think anybody’s opposed to the project, just the process.”

He was just following the rules when he denied the project, commented Buckles.

Cutler expressed sympathy for Manougian and said he hoped the process would go through as swiftly as possible; however, overturning Buckles and ushering a project past the Planning Board was against the beliefs of the board.

“Poor planning on your part does not constitute an emergency on my part,” Cutler told. Manougian. Although the project was of no great consequence, board members agreed that adhering to process was paramount.

Manougian said the informal discussion with the Planning Board was scheduled for October 27 and the site plan review public hearing was slated for December 8; however, that would be moot should the ZBA grant Manougian’s request.

“I wish we felt more comfortable about it,” said Cutler. At that, the board continued the hearing until November 12.

Also during the meeting, the board granted James Fraser and Katherine Hanson a Special Permit to raze an existing shed in the front of the property and replace it with a new one to house a small art studio. Zoning bylaw restricts accessory structures to the rear of a dwelling, but since the couple lived at the very end of Snow’s Pond Road at house number 361, outside the view of the public, the board granted the request. 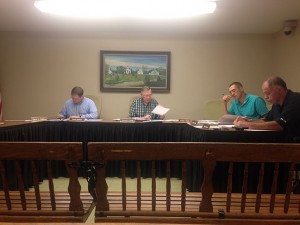