As the Town House conference room filled with families and residents from the neighborhood of 16 Cottage Street, no one noticed a significant absence: No one from Sippican Preservation LLC was present.

Marion Zoning Board of Appeals Chairman Eric Pierce opened the meeting with the full room quietly waiting for the hearing for the proposed condominium project to begin. Instead, Pierce read a letter from Christian Loranger and Albert Meninno Jr., stating that they wanted to withdraw their application without prejudice and thanked the board for their time and attention in this matter.

The board comprised of Bob Alves, John Sylvia, Tom Cooper and Pierce voted unanimously to approve the withdrawal.

The assembled let out a collective gasp of disbelief, and then sighs of relief and laughter mingled as the people stood and congratulated one another for stopping the project.

“You did it,” said Pierce to the residents in attendance, “because they listened to you.”

And what they had done was voice concerns that the proposed re-development of the four-unit building into six or more condominiums was too large for the neighborhood. Their expressed fears were that the family-friendly neighborhood would be changed into a busy dangerous place for their children. They wrote letters to various Town boards, attended meetings, and urged officials to consider their concerns and deny the project.

At the previously scheduled hearing, which had to be postponed due to a lack of quorum, Meninno stated, “…We want to be good neighbors…” But clearly, the issues of bedroom count and increased traffic, lack of parking, and changing the character of the area were too much with the plan as submitted.

Several residents asked the board if the developers could return. Pierce explained that they could return with a new plan, as it was their right to do so. He said the cycle would begin again and abutters would be notified as required.

With no other business on the agenda, the meeting was adjourned. Presently the ZBA does not have a meeting scheduled for November. 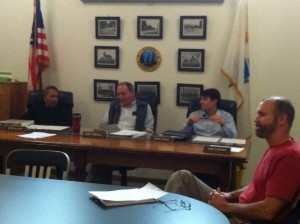