At its Monday, June 25 meeting, the Mattapoisett Conservation Commission’s eagerly anticipated hearing regarding a Notice of Intent for a new single family home and driveway on Grand View Avenue was continued until July 9. The crowded room rapidly emptied after that announcement, but the commission still had a full plate of hearings to tackle that night.

For the first hearing, applicant William Durbin received approval for an Request for Determination of Applicability (RDA) to raze and rebuild a non-conforming accessory structure at 21 Bay Road in a coastal flooding zone. The Point Connett residence had burned down in July 2010, and Durbin currently is rebuilding the home under an approved Notice of Intent (NOI) order of conditions.

An accessory structure – which was used as an artist workshop – survived the fire, and months ago Durbin gained ConCom approval to rebuild it to architecturally conform to plans for the new home. However, the ZBA rejected the plans and zoning regulations prohibit the applicant from re-submitting a similar plan for at least two years.

This time, the applicant is requesting to build an 18-by-18 structure that would attach to the new home, in addition to a small patio, in conformance with zoning regulations, engineer Douglas Schneider explained.

In the end, the commission agreed that an RDA, not a stricter NOI, is acceptable for the project – but not without neighbors speaking out against the proposal.

One neighbor, Ed Ottensmeyer, raised concerns about the construction of “an entirely new structure in an entirely new area” and its impact on the local resource area.

“It’s a risky coastal zone. There is no such thing as minor filling and grading,” he said. The new structure would subject the neighboring lots to additional coastal flooding and increased runoff due to the added impervious surface, he argued.

To that end, Ottensmeter conveyed a need for a more thorough review through a NOI.

“This structure will be with us for a long time, and outlive many of us in this room. We request a broader review,” he said.

Another abutting resident said that the new structure would enhance the wave velocity should a storm occur, bringing more water to properties behind it.

“We’d likely see a large corridor through which waves could flow,” he said.

Commission members rejected that analysis. “In my reasonably studied opinion.. if anything that structure would function as a barrier to waves coming east to those properties,” Chairman Peter Newton said.

The commission approved the plans – with the condition that siltation control is in place.

In another hearing that night, the board approved an NOI beach maintenance plan for The Sands – a private beach, parking lot and patio off Main St.

Vera Gibbons said they have been cleaning out the parking area and beach for decades, however Bobola and Newton explained that a formal beach management plan would be needed. The hearing was prompted by a complaint about sand debris. “Ms. Gibbons was very cooperative,” Bobola said.

“Even if it is a low impact process, consistency is important,” said Commissioner Bob Rogers, noting that such work would maintain consistent grades.

Tom Hurley of 12 Main Street – who said he was not the person who lodged the initial complaint – came out to express concern about debris ending up on his property.

“When a storm surge is moving in .. this is where all the debris goes. All the scrapping and junk you want off the beach, lands over here,” Hurley said, showing photos of piled up debris his property.

“I haven’t gone anywhere near that end,” Gibbons responded. “That’s not from us.”

Taking that into consideration, the commission approved the NOI for a beach management plan, with conditions that disallowed stockpiling and destruction of existing vegetation with machinery, and included requirements for maintaining consistent grading and using natural materials in the parking lot.

In other matters that evening, the board authorized Newton to choose a consultant to review a pending application to install coconut fiber envelopes of sand along a coastal bank to prevent erosion of an area on Goodspeed Island. That hearing is continued on July 9.

Also that night a discussion took place on the hiring a new Conservation Agent, a position most recently filled by Rene Drouin.

Bobola, building inspector, said the lack of an agent is especially felt during the busy summer season.

“It’s overwhelming this time of year keeping up. It’s a daunting task with the number of projects we have going… It would be nice to get someone on board,” he said. The new FEMA flood zone rules – which go into effect July 17 – are prompting a lot of construction this summer as people try to beat the clock on tougher requirements.

The next Mattapoisett Conservation Commission meeting is scheduled for July 9. 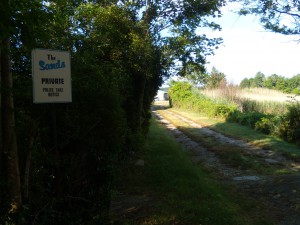