The first applicants were Daniel and Daneen Eilertsen, 20 Water Street. Davignon said that the request was needed to fine-tune the master plan, tweaking areas of the entire site and presenting a new notice of intent. Five areas were noted in this notice: 22 feet of wharf repair to structure originally built in 1881; removal of concrete surface of wharf to be replaced with loam and grass; installation of crushed stone driveway; installation of a 40- by 40-foot concrete pad for a basketball court and parking area; and modification of DEP filing to accommodate the westerly abutter by eliminating a proposed retaining wall along the driveway thus reducing fill and improving access to the water. Chairman Peter Newton cautioned the applicant and Davignon not to have too many open orders and to close out each in a timely manner. The modifications requested were approved with standard conditions.

Davignon then presented the case for changes requested by Jay and Julie Duker, 112 Aucoot Road. Calling this request for an amended order of conditions another fine-tuning of the original plans, he detailed the modification to the plan: patio and swimming area reduction; reduced storm water management catch basin; relocation of driveway to the westerly property line; re-orientation of pool, increased size of pool house, replacement of boardwalk to supported elevated walkway, removal of stones from walkway area; adjustments to concrete pour under the house and patio area; modifications of grading to accommodate landscape changes. Richard Cederberg of 108 Aucoot Road came forward in support of the proposed changes to the plan. The commission members approved the changes with condition that the boardwalk portion of the project be submitted to the DEP due to concerns that the proposed elevated boardwalk was fording a tidal stream.

Finally, Davignon represented Kevin and Lisa Geraghty, 24 Pine Island Road, with their request for amended order of conditions. Davignon said that the Geraghty’s need to make significant reduction in the overall scope of the project to allow for the increases in living spaces that the family needed. The pool and patio area are now omitted, covered porch reduced, and additions increased from 450-square feet to 870-square feet. The changes to the home will now be greater than 50 percent of the value of the existing home, thereby requiring an upgrade to the hydro-static flood vents to meet FEMA requirement. Cindy and Gerald Johnson of 3 Pine Island Road were present and in support of the project and the changes. The commission approved the amended order of conditions.

The final project of the night was for the Mattapoisett Land Trust requesting a certificate of compliance for work previously completed at the Munro Preserve located at 0 Main Street and a notice of intent for repair work to the eroded area abutting the seawall. MLT Director Mike Huguenin said repair work will consist of placing rocks into the eroded spaces of a size sufficient to keep them from falling into the water due to wave action. The commission approved the repair work on condition that the trust either produce a Chapter 91 license or file for one if not in their possession. It was further conditioned that stones and rocks will be between 8 and 12 inches in size for the repair work scheduled to begin sometime in November. The certificate was issued and repair work approved.

Continued until the next meeting was the notice of intent filed by Ron Oliveira for property located at 118 Brandt Island Road.

Conservation Agent Elizabeth Leidhold reported that she had recently spoken with Allen Loomis regarding Brandt Point Village in which he said the developers would be returning to the original remediation plan at this site. Leidhold also reported that the DEP is involved with the Blue Wave solar farm project located on Crystal Spring Road and that she anticipated the commission would be receiving unspecified modifications to the plan in the near future.

The next meeting of the Mattapoisett Conservation Commission is September 8 at 6:30 pm in the town hall conference room. 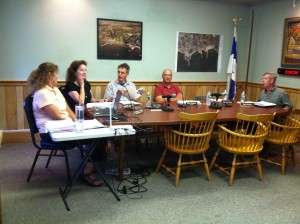