The Marion Conservation Commission met on the evening of Wednesday, April 25 for their regular meeting.  During the session, they voted in favor of an RFD to pave the driveway at 114 Allens Point Road, with the condition that the homeowners do not use salt during the winter so as to minimize negative ecological impact on the nearby wetlands.

They also voted in favor for another RFD to construct a driveway and underground utilities on property on Olde Sheepfield Road, to serve a proposed dwelling.  They approved a Notice of Intent to raze and reconstruct the house at 12 Hartley Lane and approved another NOI to construct a garage, two small additions, a deck, and to extend the existing driveway to the garage on property at 13 East Avenue.

The Conservation Commission continued a hearing for PNH Realty Trust to May 9, 2012, per the request of the company.

The next meeting of the Marion Conservation Commission will be held on May 9, 2012, at 7:00 pm at the Marion Town House. 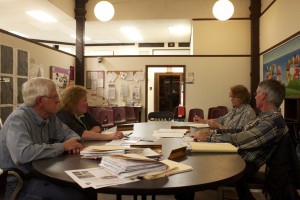