Their appeal of the original building permit for the 16 Cottage Street condominium plan was denied, but members of the First Congregational Church of Marion got what they asked for on August 13 – a new, better plan for the condo development next door that was more pleasing to the appellants.

Sippican Preservation, LLC, headed by Christian Loranger, was initially issued a building permit for the plan, which fell within the Town’s Zoning Bylaws. Members of the church appealed that plan, but finding no standing for the appeal, the Marion Zoning Board of Appeals denied the appeal. Meanwhile, church members and architect Bill Saltonstall had been working with Loranger on a plan more palatable to the church members; however, this plan then required a Special Permit, which the ZBA did grant on August 13.

“My perception is … that the builder has, by right, a plan that he can do what he wants,” said ZBA Chairman Eric Pierce. “He has worked with the neighbors…. If we are to protect the town’s interest, we ought to listen to the neighbors.”

Deeming the matter within the purview of the ZBA and saying the new plan was still slightly lessening the non-conformity of the existing structure, Pierce gave the nod and welcomed a motion to approve.

There was some question a couple of weeks ago about whether ZBA member Betsy Dunn, who is also a church member, former church treasurer, and choir director, and new ZBA member Joanna Wheeler, church clerk, should have recused themselves from the appeal matter and publically stated their association with the church.

All members, including Dunn, voted in favor of the Special Permit.

Since the last meeting, Joanna Wheeler has resigned from the ZBA.

Also during the meeting, the ZBA approved the Special Permit request from Lisa and Ben Proctor of 69 East Avenue, who plan to raze and rebuild the rear deck of the existing single-family house and build a second addition to the home.

“It doesn’t do anything but improve the neighborhood,” said Pierce.

And seeing none of the abutters present to oppose the project, the vote to approve was unanimous.

The next meeting of the Marion Zoning Board of Appeals is scheduled for August 27 at 7:30 pm at the Marion Town House. 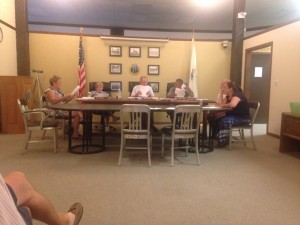