Nobody was injured on Monday morning when the second floor ceiling of the Marion Natural History Museum suddenly collapsed.  The cave-in occurred around 11:00 am and did not involve the roof of the building.

“It was the whole ceiling,” said Marion Building Commissioner Scott Shippey.  He estimated that the ceiling measured about 50 feet by 50 feet.

“It could have been due to excessive weight on the ceiling,” Shippey said, but a cause has yet to be determined.

Shippey and Town Administrator Paul Dawson said that the last major construction project at the building was the addition of the new wing over 30 years ago.  They could not confirm whether or not any renovations took place in the years following that construction.

“When I got there yesterday, I sobbed,” said museum director Elizabeth Leidhold. “I’ve been here 23 years and this was devastating.”

The clean-up effort, which began yesterday, is expected to extend into the latter part of the week.  In the meantime, the library on the first floor will be closed until further notice. All children’s programs will be held in other locations around town.

“Then the insurance company will come in, investigate the cause, and figure out a cost,” said Dawson.

As luck would have it, damage to artifacts and displays was less than expected.

“On the southern side, the glass of the display cases is broken, but the cases are still standing,” said Dawson.

He also said it looked like most of the damage was concentrated on the south side of the building, closest to the Town Hall.

“We’ve done a lot of packing up of items and we brought them to the Marconi building,” Leidhold said.  “Funny enough the butterfly display was intact.  The fish tank along the back wall was fine, too.”

One casualty of the accident, she said, was the loss of the original gas lamp fixtures that hung from the ceiling.

The summer programs offered by the museum will continue as scheduled, Leidhold said.  The new rain location will be the Marconi building at 13 Atlantis Drive, Marion.  While the interior of the museum sustained a massive amount of damage, it seems likely that the museum will eventually open to the public again.

“It’ll be back,” said Shippey. 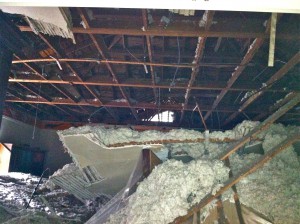