You are here: Home » News » Bylaw Back to the Planning Board

After a robust discussion on February 23 between the Rochester Board of Selectmen, bylaw subcommittee, and town department heads, the draft Limited Commercial Bylaw amendment slated for the Annual Town Meeting warrant will head back to the Planning Board for refinement before property owners in and abutters to the affected zones are invited to a pubic forum to share their concerns.

Planning Board Chairman Arnold Johnson told selectmen the goal was to clean up outdated and irrelevant language from the bylaw and to add a mixed-use capability combining residential use with commercial use.

The zoning change would only affect the two areas in Rochester zoned for limited commercial use: across from the Town Hall and to the side of Town Hall in the town center.

Selectman Naida Parker’s concern was how comfortable residents in or near the two zones would feel about the proposed changes, urging their voices to be heard.

One resident abutting the limited commercial zone, having experienced the Planning Board’s attempt years ago to create an overlay district that some residents adamantly opposed, wasted no time before expressing his skepticism.

“I think you’re putting the cart before the horse,” said David Watling. “We still don’t know what the Town will propose…. We haven’t heard anything for ten years.”

Not true, according to Johnson.

Johnson said, with the bylaw as it is now, the only option provided to a developer is a residence or a strip mall. As for the language, words such as “typewriter repair shop” and other obsolete terms will be deleted.

“This isn’t going to take away anybody’s right to be notified,” said Johnson. “The village overlay thing is gone.”

Planning Board member Susan Teal said the bylaw changes were good for the town and acknowledged Parker’s mention of abutter concerns.

“This is a draft,” said Teal. “If it gives the selectmen heartburn, we want to know that now.”

Johnson pointed out that both properties affected by the bylaw changes are currently up for sale with interested parties. He referred to amended language in the bylaw that mandates future plans for development be “harmonious with the neighborhood.”

That’s when Planning Board member Ben Bailey voiced his dissent for language he considered “objective” and subject to interpretation.

“There’s language in there that’s unspecific,” said Bailey. “It’s the kind of language that somebody could just say, ‘I don’t think that it is…’”

Town Counsel Blair Bailey told Bailey there was “no way on planet Earth” that he could draft a bylaw with language not subject to interpretation.

Ben Bailey brought up another section of the draft bylaw regarding the 20 percent green space lot coverage that he found unclear, which Johnson and town counsel explained.

“One of the biggest changes is that it allows for a little bit more imagination to take place,” said Johnson. “Which might be a good thing, but it also give us (the Planning Board) the opportunity to say no.”

The boards also discussed the notion of hiring an outside codification service to reorganize and codify the Town’s zoning and general bylaws to make the book of bylaws user-friendlier to residents and board members alike.

A single bid came in at $12,800 with a $1,200 annual maintenance fee from one of the only companies that provide this service in the state.

“It seems that it’s very overreaching for what we really need,” said Johnson. “And the cost is quite substantial to get going.”

Although the annual maintenance fee did not concern Johnson so much, he was not impressed by some of the seemingly frivolous services the company would provide, such as gold embossed bylaw books.

“We don’t need stuff like that in Rochester,” said Johnson.

Johnson also found the manner in which the company organizes topics into chapters, like road construction, for example, a problem.

“Planning Board rules and regs vary according to size and zoning,” said Johnson, arguing that organizing the bylaws in such a way would result in a reader having to “bounce back and forth.”

“It would give me a headache,” said Johnson.

There were other issues with the proposal, including the process possibly taking over a year for the company to complete.

Selectmen and Johnson discussed approaching the company to ask it to pare down the list of services they would provide to fit the Town’s basic needs, which they determined would be the bylaw codification and website maintenance to keep bylaws current.

Also during the meeting, selectmen approved the appointment of Lydia St. Laurent as part-time EMS dispatcher.

The selectmen also set the date of the Annual Town Meeting for June 1. 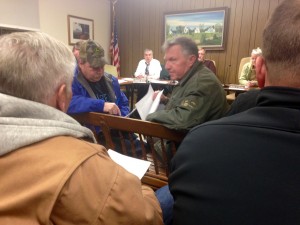