You are here: Home » News » Budget Season Close to Closing

The March 19 meeting was brief, with only three FinCom members present to meet with Norman Hills on behalf of the Planning Board and the Capital Improvement Planning Committee.

The group discussed the science behind the Environmental Protection Agency’s limits of pollutants and the discharge of pollutants from the three unlined wastewater lagoons off Benson Brook Road and the potential costs.

The bid for a new pumper truck for the Fire Department remains at $540,000, even after an updated bid came in about two weeks ago, which Minard said was “still in that category.”

Hills pointed out that the number does not account for the value of the truck the Town will trade in once the new one is purchased.

As for the Planning Board’s anticipated spending for an updated Master Plan, some of the proposed $84,000 necessary to accomplish the job will be supplemented by grants totaling $28,650, as well as leftover funds from FY15 and previous Town Meeting articles.

The Planning Board will have an article on the Annual Town Meeting warrant for $20,000 to get the MP process through to the next fiscal year, although Hills was initially hoping for a $24,000 article to allow for some “fudge room.”

There was some candid discussion about which Town entity should be driving the Master Plan project, agreeing that the selectmen should have an active role in the process.

Minard said, “If they don’t drive it, nothing is going to happen.” A few minutes earlier Minard said pessimistically about the Master Plan project, “The selectmen use it as a foot rest and the town administrator uses it to prop up the paperwork he hasn’t gotten to yet.”

Hills said the Planning Board is hoping to see the MP completed in two year’s time. He said he is still hoping the Planning Board could eventually employ a part-time town planner to assist with the process, which will appear on the warrant as an article, hopefully for $30,000 as the Planning Board requests. FinCom did not comment on how much of that $30,000 it would support.

After Hills left, the three FinCom members summarized the status of the FY16 budget, saying issues with the ORR School budget should be resolved soon. The committee questioned the necessity of a full-time principal at Sippican School with student population on the downswing, barring a sudden increase from the 40B project.

“I personally don’t think that the school needs a full-time principal at this point,” said FinCom member Karen Kevelson. Perhaps in the next few years if there is any student population growth, she added.

The next steps in the budget process: get a final number from ORR and adjust the free cash balance. The selectmen, said Minard, are expected to approve a final FY16 budget on March 31.

The next meeting of the Marion Finance Committee is March 26 at 6:30 pm at 13 Atlantis Drive in the conference room when the committee will make final recommendations on the budget and Town Meeting warrant articles. 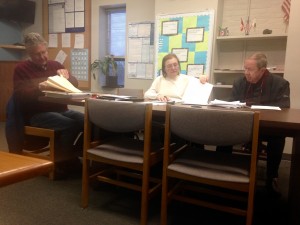