Town Clerk Catherine Heuberger raised concerns that the proposed methodology for ensuring that excise taxes, sticker permits, and mooring fees for boaters using boatyard facilities – a process now primarily handled by her office – would become more complicated if handled by commercial marinas and similar businesses. She said new software employed in the last year had made it easier to collect data needed to bill boaters more thoroughly and accurately.

“Bills are just about ready to go out now,” said Heuberger. “How do we back out the boatyard customers?”

The proposed new process, which had been vetted and discussed for months in public meetings held by the Marine Advisory Board and the selectmen, would set a flat fee of $200 for boaters using commercial marina moorings. The fee would include the sticker permit and be issued by the marina itself. But Ned Kaiser and Carla Edwards of the Mattapoisett Boat Yard didn’t agree with the change.

“Why does this become our responsibility?” Edwards asked.

The new plan would require marinas to pay the new fee upfront, a whopping $30,000 increase over previous years.

Town Administrator Michael Gagne explained that the waterfront enterprise fund had been subsidized by general fund appropriation for years, and fee increases were necessary to allow the department to operate independently.

“It is not a pure waterways fund at this point,” he said.

After discussing the list of increases, Selectman Paul Silva suggested Gagne pull a committee together of marina owners and town employees to further iron out the process that would allow increases to roll out for the coming season.

“Work it out, be cooperative and get the thing done,” said Silva.

Selectman Tyler Macalliser reminded everyone, “Fees have not increased in fifteen years.”

Fees will be set at the February 9 meeting of the Board of Selectmen after the new committee meets.

Earlier in the evening, Goodspeed Island residents Daniel DaRosa and Tony Campbell came before the board to request snow plowing of Railroad Avenue and trash collection.

DaRosa said that when he first moved to his home at 3 Goodspeed, the road was plowed and trash was collected. He said that for the past several years, plowing had stopped, as well as trash collection. DaRosa said his main concern was safety and the ability of emergency vehicles to reach his and Campbell’s home if the road wasn’t plowed.

Collyer began the discussion by saying, “In theory, you get the benefit of a private road,” but went on to say it was in fact a public road over which the Goodspeed Island residents enjoyed an easement to reach their property.

“We restrict vehicles, giving the impression of a private road,” Collyer added.

Highway Superintendent Barry Denham was present to handle plowing questions. He said, “It was plowed from time to time, but it’s not part of the plan.”

But DaRosa said the town was plowing all the way to the sewer pump station, a mere 500 feet from the entrance to his private driveway.

“If they are going to plow to the pump station, it’s only a little ways down the road,” to his house, DaRosa said.

“It is town property but not a public way. It has not been approved by town meeting,” Silva said, adding that it is “public property that you have an easement over.”

Macallister interjected, “If you are going to get it plowed, you’re going to have people going down there.”

The conversation shifted to future possibilities of opening the beach area up to public parking and preparing the road, especially in light of the plans for a bike path traversing the area.

“Times have changed,” said Collyer. “I’d have no problem going before town meeting to get funds for parking and road maintenance.” He continued, “If the abutters want the road plowed and understand the public would have access, maybe we need to take a step back.”

Regarding DaRosa’s and Campbell’s concern about emergency services having easy access to their homes, Denham eased their minds, saying, “I have trucks located throughout town in strategic locations … we are sometimes closer than the police and fire departments … oftentimes we have to plow right into the front yard.”

Gagne said he would work with Denham on the bigger issue of opening the area up to public traffic noting, “I think we can do some things there that can benefit the public as a whole.”

Denham was quick to add, “Let’s do some planning first. We have a ways to go before people can drive down and park there.”

Regarding town meeting, Silva said, “Let our residents decide how they want to spend money.”

On the matter of trash collection for Goodspeed Island residents, Gagne said he had already asked the Board of Health to speak with ABC Disposal. However, Collyer pointed out that their trucks were too heavy for the old culvert under the roadway.

In other matters, Gagne recently met with members of the Massachusetts Department of Transportation to coordinate various aspects of the bike path Phase 1B.

He said the current appeal of a recent Conservation Commission decision to allow test borings would most likely not negatively affect funding expected to be released this year. Gagne reported that the DOT has given permission to proceed with permitting and that a Notice of Intent would be forthcoming for the test borings.

Gagne also invited the public to attend a meeting on February 4 at Center School to discuss the continuation of improvements to roads and sidewalks in the village. 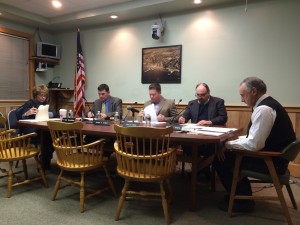