You are here: Home » News » Board Stalls on New Tobacco Legislation

Bob Collett, director of the Cape Cod Regional Tobacco Control Program, had the draft legislation in hand on August 25 for Board of Health members to vote on, but board members Dr. John Howard and Albin Johnson were reluctant to take action that evening.

“I’m a little hesitant to regulate prices on things,” said Johnson. “I think our biggest issue is making it twenty-one.”

Johnson said he was in favor of including e-cigarettes and other nicotine delivery products in the 21 and over law, “But once you start naming specific products, it’s a slippery slope,” said Johnson. “It’s too difficult to regulate.”

Collett’s defense for adding at least the minimum pricing to the age minimum, if not the total ban, was that these products are specifically targeted for those under 21. Making the product less accessible would inhibit their use by young kids.

“The likelihood of a person twenty-one or older buying this product is much less than a sixteen- or seventeen-year old,” said Collett.

Kathy Wilbur, program manager of the Tobacco-Free Community Partnership, said she leads several youth groups, and the number one reason that kids said they tried smoking was because of the flavored tobacco. Wilbur said, when questioned if they would have tried smoking tobacco without the added flavors of bubble gum, cotton candy, sour apple, or cherry, there was a resounding no.

“Twenty-one, while it is a step in the right direction, it’s not a silver bullet,” said Wilbur. “Unfortunately, kids under twenty-one are going to get their hands on flavored products as long as they’re on the shelves. We like the flavor ban with the twenty-one, to make the strongest possible defense against kids becoming addicted.”

Health Director Karen Walega said she would prefer seeing the minimum age increased to 21, along with a flavored tobacco and nicotine products ban included in the legislation.

Johnson and Howard remained united in their front to keep the legislation strictly to the age minimum, but Howard did state that he was prepared to vote either way.

“As a conservative idiot, I like to keep things as simple as we can,” said Howard. “And logical. Practical.”

The board will consider the legislation language in the weeks leading up to their next meeting and, once legislation content and language is chosen, the board will hold a public hearing on the new tobacco and nicotine regulations to give residents a chance to speak.

The next meeting of the Marion Board of Health is scheduled for September 8 at 4:30 pm at the Marion Town House conference room. 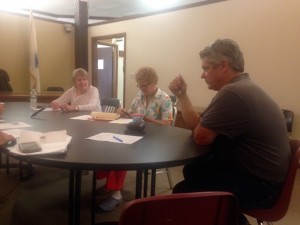