You are here: Home » News » Board Seeks Wastewater Permit Solution

As recommended by Town Administrator Paul Dawson, the Marion Board of Selectmen moved forward with its response to the Environmental Protection Agency’s draft NPDES permit, which according to Dawson, placed unrealistic demands on the Town’s wastewater treatment system that would lead to costly upgrades and a complete overhaul of the current wastewater treatment techniques. The National Pollutant Discharge Elimination System permit issued by the EPA controls water pollution by regulating the point sources of pollutants.

In a letter dated December 17 to the EPA and signed by all three selectmen, the board asked for an extension of the 30-day public comment period, asking for 180 days so the Town could provide more detailed comments on the draft permit that imposes changes that are “vast,” according to the letter, “and if left unchanged,” the letter reads, “will result in a substantial and unprecedented revision to the Town’s wastewater treatment plant…”

During the December selectmen’s meeting, Dawson referred to the matter as the NPDES “ongoing saga” that threatens to essentially end the use of the Town’s three sewage lagoons, the very foundation of the wastewater treatment plant.

“To date, we have not received a response to our request,” Dawson told selectmen, but the EPA did on its own issue a 60-day extension since they issued the draft NPDES during the holiday season. The comment period has been extended from January 2 to February 2. Dawson said he is certain, though, that the EPA has received the letter by now.

Dawson commented that communities within the Taunton River Watershed Alliance have had their own issues with the EPA regarding its NPDES draft permit, calling the issues “similar, yet different.” What the two parties have in common, said Dawson, is the belief that the EPA is applying science that is not correct relative to acceptable levels of nitrogen, calling the new levels “unachievable, even with the latest technology.”

The letter to the EPA references the Buzzards Bay Coalition’s report on the nitrogen and phosphorus levels pertaining to the lagoons, and alleges the report was “demonstrated to be fundamentally flawed” and the basis for the EPA’s draft NPDES permit.

The Taunton River Watershed Alliance is consulting with a high-power environmental law firm based in Washington D.C., and, although Dawson said he does not yet think employing the same law firm is appropriate at his time, he asked selectmen to authorize a discussion with the attorneys.

“I don’t think there’s any harm in exploring it,” Dawson told selectmen.

Board of Selectman Chairman Jonathan Henry speculated that the law firm’s services would be costly, but if it could save the Town from spending $5 million in upgrades to the wastewater system, “It could be worth it.”

Also during the meeting, the board considered a request from Bay Watch Development that offers the Town an additional five affordable housing units within the 40B housing development in exchange for $450,000 in Community Preservation funds.

State regulation mandates that 10-percent of the housing be affordable housing, and adding five more units to the already allotted four units would bring the Town’s percentage up to 7.7-percent.

Bay Watch would need to file an application for a modification of the comprehensive permit with the Zoning Board of Appeals, and the Marion Affordable Housing Trust and Community Preservation Commission would also need to be on board with a recommendation at Town Meeting to approve the CPC funding.

Chairman of the Affordable Housing Trust Jennifer Watson attended the meeting and addressed the matter, which she said would be discussed further during the trust’s next meeting on January 12.

“We have to do something,” said Watson regarding the targeted 10-percent affordable housing. “This proposal sounds intriguing.”

Selectman Stephen Cushing commented that “there’s a lot of moving parts that have to line up” before this request could be granted.

The next meeting of the Marion Board of Selectmen is scheduled for January 20 at 7:00 pm at the Marion Town House. 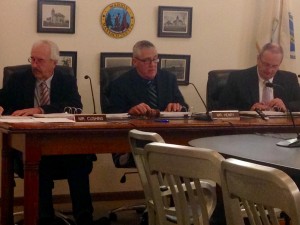