You are here: Home » News » Board Recommends Bylaw Amendments

The Rochester Planning Board met May 26 to discuss three zoning bylaw amendments to be presented at the June 8 Annual Town Meeting.

The board voted unanimously to recommend that the Town adopt the following amendments in upcoming Town Meeting.

One is an amendment to section VII of the Flood Plain District. The amendment will not affect any residences in Rochester, only a portion of the New Bedford Waterworks site.

The next amendment was to sections III “Definitions” and IV “Limited Commercial District.” The amendment includes a definition for Mixed-Use Development, which is “a development that combines residential with retail or service uses within the same building or on the same site.” The amendment to section IV would add mixed-use development as an allowed use under the limited commercial district.

The amendment goes on to create a guiding principle and specific objectives, as well as the insertion of mixed-use development requirements and the deletion of “antiquated business type terms to be replaced by ‘retail and commercial establishments.’”

Should that amendment fail to be adopted, a third amendment is featured on the warrant that only has the definition for mixed-use development and the change to the limited commercial district.

The amendments were developed through cooperation between the Planning Board and the Zoning Board of Appeals.

Chairman Arnold Johnson encouraged everyone on the board to attend the town meeting.

“Everyone here try and make it. I think it’s important when the Planning Board is coming forward with legislation, especially like this,” said Johnson. “It shows we have worked together on this for quite a while and in conjunction with ZBA. I think it’s important for the townspeople if we show up. It helps with the level of commitment that we have.”

Richard Cutler, chairman of the ZBA, warned those planning to attend the town meeting that, based on a conversation he had with the town moderator, it will likely be a long meeting.

Other business at the meeting included a follow up discussion about the Little Quittacas Solar Project. In a discussion carried over from the May 12 meeting of the board, members discussed what recommendations would be made in regard to vegetation on the site.

The discussion centered on whether the area should be seeded or allowed to return to nature. Low rainfall and high wind has made the area very dry, according to the board, and therefore unsupportive of common short-rooted grasses. The worry is that if the area lacks vegetation then the berm – a type of narrow ledge – would be subject to destruction during a heavy autumnal rainstorm.

The other option, besides allowing it to return to nature, is to find plants that thrive in similar environments and plant them. Following a discussion, it was decided that there would be additional talk with those responsible for the site.

During the town planner’s report, the board reviewed a recent site visit to the Pines at Hathaway Pond.

“The guy did a really nice job of constructing those units and finishing up that project,” said Johnson. “The basin looked good … he still had some seeding to do around three of the units and in front of the basin.”

The board attributed normal settling to reports from those in the area about cracking around manhole covers.

Towards the end of the meeting, Conservation Agent Laurell Farinon updated the board on the state of the Open Space and Recreation Plan. The plan will continue to develop as they release a survey in the coming months, both through a mailing campaign and online. The survey will be three pages long and consist of roughly 20 questions. 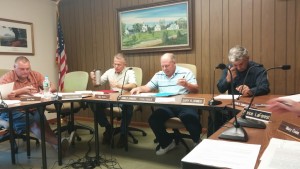