You are here: Home » News » Board Erupts Over Minutes…Again

An intense argument over minutes overshadowed budget discussions, as the Marion Planning Board was divided 5-2 (a consistent number that night) in its opinion regarding how Planning Board Clerk Robert Lane should be taking minutes. The debate led to a motion by member Steve Gonsalves to keep meeting minutes limited to bare-bones information such as date, those in attendance, motions, and votes – a move board member Norman Hills said went against Robert’s Rules of Order. Lane disagreed.

Lane, Gonsalves, and Chairman Stephen Kokkins argued that the video recordings taped by the cable access channel could serve as a reference for those wishing to review the meetings, and Hills was adamant that it was unacceptable to replace meeting minutes with DVDs.

The argument on January 20 was continued from a previous meeting when the September 15 meeting minutes were first presented for acceptance. Board member Eileen Marum opposed descriptive language included in the minutes that she considered editorializing, specifically when Lane wrote that Marum “forcefully criticized” the Planning Board assistant, resulting in her leaving the room. Marum contested the description and objected to other references to tone.

Lane amended the minutes to reflect Marum’s supposed request for a verbatim transcript of what was said, and during the contentious January 20 meeting, Marum denied the claim.

Hills and Marum continued in their criticism of Lane’s September 15 minutes, relentlessly.

“In nine years never, ever, ever have I seen this,” interjected Gonsalves. “This is insane. This is never going to stop. Where do we go from here? It’s like a merry-go-round. It’s ridiculous.”

“What’s the problem with writing down what happened at a meeting?” Hills asked, questioning why Lane refuses to include in the minutes words pertaining to a motion Marum made during the September 15 meeting.

Kokkins, in trying to keep the discussion on track, suggested there was a philosophical difference among board members.

“There’s nothing to be gained by not putting the information in the minutes,” continued Hills. He said it was valuable information that people in the future might refer back to. “If you don’t like it, then it’s too bad. It’s the way it happened,” said Hills. He then turned to Gonsalves and called his motion for “skimpy” minutes irresponsible.

Nowhere in Roberts Rules of Order does it say cable access recorded DVDs can replace minutes, Hills pointed out.

The vote to approve the “minimal minutes” passed 5-2, but even then the arguing continued. Hills brought up further issues he had with the minutes, with grammatical errors and misspellings like changing “tilted” to “titled” as it should have been written.

Marum alleged that Lane’s employment of a transcript service for the contested portion of the September 15 minutes had ties to his business, and thus had the appearance of a conflict of interest. Lane denied the claim. When Marum insisted, Gonsalves laughed, causing Marum to turn to Gonsalves.

“Yes it is,” said Gonsalves.

Board member Rico Ferrari asked Marum if she was a trained attorney, and then called for the question, saying the meeting was getting out of hand.

The vote to accept the amended September minutes was again 5-2.

In other contentious matters, earlier in the meeting the board talked about hiring a transcript service to record past and future meetings relative to the developers of a CVS at the corner of Route 6 and Front Street. Not having the funds for the service budgeted for fiscal year 2015, the board voted, 5-2, to amend the FY15 budget by transferring funds from one line item to the consultant line item in the amount of $950 to record two past meetings with the CVS developers.

Hills and Marum argued that it was not necessary, given that no application has been filed yet and if needed in the future, the board could revisit the matter.

As for FY16, Ferrari suggested taking the $500 budgeted for travel and meeting expenses and moving it into the consultant line item for transcript services in the future, a move Marum opposed since she is the representing board member for SRPEDD and travels occasionally to attend meetings and educational sessions on behalf of the board.

Ferrari said he saw no return on the money and the board, as a whole, did not benefit from Marum’s continued education. Marum told Ferrari that he could “tap into [her] knowledge” at any time, but suggested that he was unwilling.

“Then I say strike it totally, with that attitude,” Ferrari said about funding the line item. He said he would “pass” on opening up that “can of worms” when it came to Marum’s knowledge.

Ferrari motioned to de-fund the travel expense line item, with no second.

“There must be some value there,” said board member Michael Popitz. He wondered if the board was taking advantage of the information Marum was learning and if she ever brought back informational pamphlets and such for the board to see.

“I have brought them here,” said Marum. “And nobody was interested.”

Ferrari then suggested level-funding the expense line, keeping it at the FY15 level of $290 and plugging the remaining $210 in the consultant line. The motion passed, 5-2.

The next meeting of the Marion Planning Board is scheduled for February 2 at 7:00 pm at the Marion Town House. 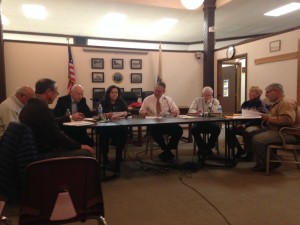