You are here: Home » News » Board Envisions a Rochester Center

It takes a village center overlay district to build a village, and that is what the Planning Board mostly discussed January 28, brainstorming ideas and sharing its visions of what a proper town village center should look like, comparing them against the existing village centers of other towns like Marion, Mattapoisett, and Scituate. Quaint, unique, and homey is just what the board deems suitable for a town center for Rochester, emphasizing that the goal is not to encourage a “business district,” but rather a “village district.”

The discussion began when Board Member Ben Bailey simply asked, what is the point of the village overlay district, and whom will it benefit? Bailey thought the language in the opening paragraph of the proposed zoning by-law was too vague and did not explicitly cite the benefits a new overlay district would provide an owner of property located in the center.

Chairman Arnold Johnson said it was important that residents understand a few things about the proposed overlay district. The board was not seeking to further restrict development in Rochester center; rather, it wants to provide a more concise, controlled process to make it easier for property owners to follow the required steps to develop their property, while removing some of the restrictions property owners currently face, including the “unsure process” of seeking variances through the Zoning Board of Appeals.

This would benefit not just the property owners, said Johnson, as the Town of Rochester as a whole would ultimately enjoy the same kind of town center other towns possess.

It would enhance the property values of properties in the center by allowing mix-use zoning and create opportunities for small businesses to thrive and service the community. Setback requirements would be more relaxed, as opposed to allowing reduced lot sizes.

“We have been kicking this around for years,” said Johnson. He said it is important to understand that what the board seeks to accomplish is to give center property owners more options for their properties, provide for more opportunity for use, and allow greater density to give the center more of a village-feel.

We want to have a real center of town, said Board Member Gary Florindo. “Unique little areas that make it like a homey part of town,” he added. A real center – not just a business district.

Also at the meeting, the board had a brief discussion with Michael Camara of Shawmut Associates, LLC who is planning to re-develop the solid-waste and recycling processing facility at 50 Cranberry Highway. Johnson told Camara he encountered some “red flags” when a subcontractor for the project went in to try to pull permits for some work and was unaware of the process and the required preconstruction meeting.

Johnson said he needed clarification on who was the hired project manager, and who would be the contact person for the project.

Camara reassured the board that everything was in order and that the project manager is Bruce Hanna, who assisted in the development of Camara’s New Bedford facility. Camara also gave the board contact information for Hanna.

There are a couple alterations to the site plan, which will be discussed at an upcoming preconstruction meeting on Thursday, January 30 at the Police Station.

Also during the meeting, the board engaged in a rather lengthy discussion over drainage concerns pertaining to the Connet Woods project, despite the matter having been continued until the February 11 Planning Board meeting.

The board took a vote and ratified an email that Johnson had sent to the developer regarding drainage matters, and the board is optimistic that the problems can be mitigated fairly simply.

The next scheduled Planning Board meeting is February 11 at 7:00 pm at Town Hall. 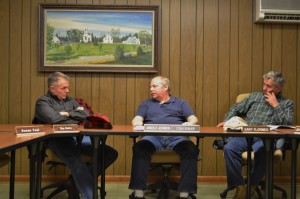