You are here: Home » News » Board Content with Zoning Bylaw Progress

Just one night after discussing its limited commercial zoning bylaw amendment with selectmen, the Rochester Planning Board on February 24 made some finishing touches to the language and now looks toward presenting it to residents living in or near the affected zones.

Based on issues brought up the night before, the board reviewed some notes sent by Town Counsel Blair Bailey meant to clarify certain sections of the bylaw – mainly points brought up by Planning Board member Ben Bailey about objective language subject to interpretation.

Language in one section of the bylaw mandating a 20 percent green or recreational space of the “disturbed” area of the development was tightened to include explicit examples of such spaces, like pedestrian walks, decks, paths, plazas, and gardens, among other things.

Bailey’s concern over the term “harmonious” led to a bit more discussion on the matter, but the term will stay put in the bylaw, regardless. Bailey wondered how one would decide what was harmonious.

“Isn’t it like pornography?” Planning Board member Susan Teal asked Bailey. “You’d know it when you see it.”

Planning Board Chairman Arnold Johnson added that this section of the bylaw serves more as a parameter for development and less as design restrictions. Bailey conceded.

“I understand that you can’t write a bylaw that protects the neighbors that doesn’t have subjective language,” said Bailey, adding that he stood mostly for property owners’ rights and fewer restrictions placed upon them. “But what I would do to this, nobody would vote for.”

The board decided to send the changes made to Bylaw Subcommittee Chairman Richard Cutler to review instead of calling another meeting of the subcommittee.

Johnson asked the board to make suggestions on a date for a Saturday public forum for residents living in or near the limited commercial zones affected by the bylaw amendment, and determined that March 28 at 9:00 am would be best.

“I would like to see a dry run of the presentation for the board no later than our second meeting in March,” said Johnson, who would prefer to answer all of the concerned residents’ questions at the forum rather than explain it on Town Meeting floor. 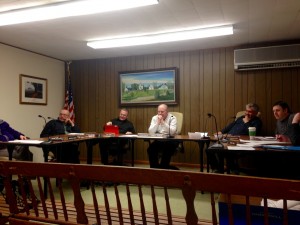